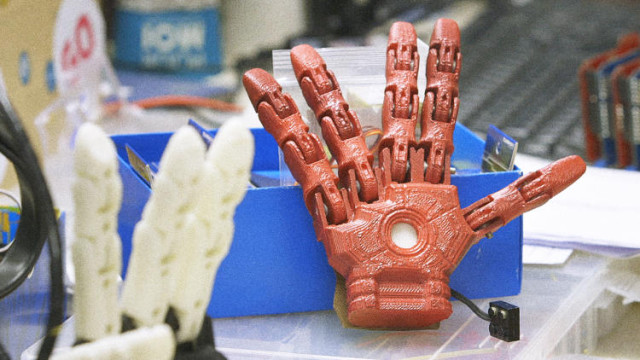 Open Bionics started out in 2013 from a bedroom as a crowd-funding project and was later supported by Bristol Robotics Laboratory. The creator of Open Bionics, Joel Gibbard, plans to help hand amputees by providing them lightweight robotic hands. The design of these robotic hands has been iterated 10 times till now since they were first designed. However, now that they are backed by Bristol Robotics Laboratory, these 3-D printed robotic hands can be made at a much cheaper and faster rate and this is exactly the reason why they have been declared as this year’s UK winner of James Dyson Award.

Open Bionics’ prosthetic hands rely on myoelectric signals which implies that it detects muscle movements through sensors that will be stuck onto the owner’s skin which helps them to use and control the grip. It is also extremely light in weight and can be customized according to the needs of the person. This prosthetic arm is probably the most functional amongst all and basically works like skeletal structure with a skin on top just like a normal hand.

While earlier it took nearly weeks or months to get prosthetic arms, now they can be availed in a much less time. Open Bionics plans to sell these prosthetics from next year and at a price of £2,000 for each device which includes fitting cost as well. Although prosthetic arms that come fitted with hooks can be bought at a similar price, the ones where owners can control their fingers just like the one produced by open Bionics costs generally between £20,000 and £60,000.

This UK engineering prize comprises of a cash reward of £2,220 along with a chance to compete at an international level for a title that’s worth £28,600.