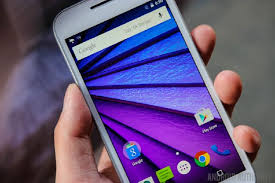 Last year’s Moto G literally shook up the mid-tier smartphone realm. It had impressive specs, a well designed body and features that were way above its price. Moto promised that the next Moto G would be even better. Fortunately, a few leaks here and there had already given us some idea about Moto’s upcoming mid-ranger but now that the phone is finally unveiled, we bring you a close look of the new Moto G 3rd Gen.

The new Moto G is as interesting as its predecessors. While the entire world was fast asleep, Moto launched the new G in India and even overshadowed the new Moto X Style. The Moto G is a best seller and it looks like the company has done everything right so as to make sure that the new model struck a crucial cord between price and performance.

Look and Feel
The new Moto G can definitely be regarded as the best looking and feeling one of all three that we have seen till date. The front looks almost the same; however, the main difference lies in the back. The entire back feels metallic especially the part where the camera and the flash is located. Apart from that, the back of the phone also has this unique design on the back that consists of diagonal lines which give the overall phone a highly premium look. The phone is designed in such a way so that those who use it don’t feel that they are using a mid-range smartphone. In fact, the entire look and feel of the phone is designed so as to give its users a more premium approach.

Hardware
This year’s Moto G, as we already know through the various leaks, is powered by a 1.4GHz Quad-core Snapdragon 410 chipset. However, there is a big difference between the two models that are available today. The baseline model would cost $180, but will only get you 8GB of storage along with 1GB RAM. So, it’s better to go for the model that’s starting at $220 as it will get you double storage and RAM excluding your Moto Maker add-ons.
Moto G has definitely started feeling a little more on the premium side thanks to the eye catching looks which are quite different as compared to that of its predecessor. Although there’s still a significant size of bezel running around the phone’s 5-inch 720 pixel display, however, the addition of the metallic accent around the new Moto G’s 13-MP camera and flash tends to add a unique kind of welcome dose to the styling of this thing.

Performance
A mid-ranger price but yet a flagship kind of performance is what Moto G has always been known for. This time too, the new Moto G focuses on performance and that’s exactly what the big upgrade in its chipset has to say about it. Sussing out performance from such combinations can be crapshoot but combination of this decent silicon and near-to stock version of Android 5.1.1 means you might not face hiccups.
The Snapdragon 410 processor might not be able to blow you away, however it surely can provide a solid punch of performance as compared to most other low-cost unlocked smartphones that are present in the market today. Apart from that, the new Moto G is rigged with smart features like the Moto Assist which tends to work just as good as it should which ultimately only helps Motorola to stand out from the crowd.

Camera
It is also been said that the new Moto G will make use of the same camera as that installed on the Nexus 6. However, that’s definitely not the full story. Although the new Moto G makes use of the same 13-megapixel Sony sensor like its bigger and pricier cousin along with a similar f/2.0 aperture lens, however, the difference lies in the way the usual elements around the phone are constructed.
The lens in the Moto G comes loaded up with certain IR-filtering coatings which further help the camera to handle ambient light a little more intelligently. Early results of the images clicked by this new camera of the all new Moto G appear to be pretty impressive. The photos are more accurately exposed where they need to be and can be said to be at par with those taken by a pricier phones like the Galaxy S6

Moto Maker
Nowadays a lot of companies are cashing on their devices because they are providing colourful backplates for their phone. OnePlus recently revealed the 2 with myriad options for backplates and Moto, well they’ve been doing it for long as well.

With the Moto G 3rd Gen, you can also change your phone’s look entirely with the help of Moto Maker wringer. It allows you to choose from a wide variety of shades and accents for the phone’s backplates in case you are bored from the usual black and white. We think that’s a great move to attract the buyers who are more inclined to colourful options in case of phones rather than the usual colours.

Summin-up
It’s obviously a little early to declare whether you should bet your bucks on Moto’s latest mid-range killer, however, by the looks of it, it surely seems to be a pretty interesting device. It’s playful and decent at the same time and that’s exactly what Moto is known for.

Overall, the phone looks pretty solid. Build quality is fabulous, design wise the phone looks fresh, the performance is also beefed-up than before and both the rear and front cameras of the phone perform exquisitely well. This phone by no means looks like a mid-range smartphone. In fact, it can give a tough battle to all those big guns that are right now present out there. So, if you are someone who is tight on budget but still wants a phone that can serve you well, then the new Moto G might be a good option, however if you are someone who is just too much inclined to performance then you can give it a pass as it’s simply not made for you. The new Moto G, in fact, is made for those who love to experiment and that’s exactly what the company has done with this one.