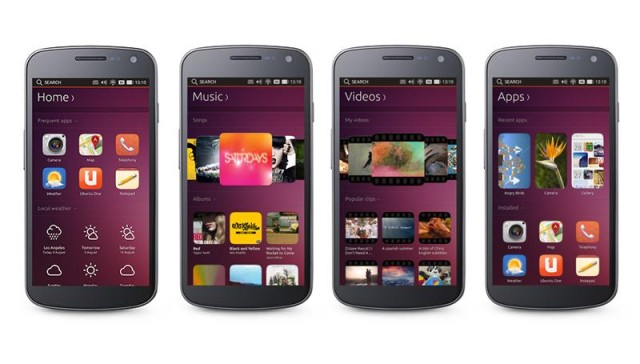 The smartphone market has matured over the last few years by humungous amounts, thanks to the advancements in the two most popular operating systems – Android and iOS. In fact, latest figures show that in the first quarter of 2015, iOS and Android phones accounted for a whopping 97 percent of the global smartphone sales. The rest was captured by Microsoft and Blackberry.

Right now, there doesn’t seem to be much opportunity for the new players in the smartphone OS market, however, it looks like popular Linux maker, Ubuntu, is undeterred by it and is planning to take the challenge anyway. The company has recently developed a version of Ubuntu especially for mobile and is hoping to shake the current mobile operating systems realm. Although, the Ubuntu Phone is still far from its final stage, we however, decided to have a peek of what the company has been cooking all this time.

Daily Stats on Your Lock Screen
Pressing the power button will pop-up the Ubuntu lock screen where there’s nothing particular to note apart from the regular date, time and a circular dial with tiny little dots on its perimeter. However, if you look closely, you’ll realise that these dots denote the days of the month. The dial tell you the number of text messages you’ve received in that particular day, number of songs listened to that day and number of pictures taken.
Apart from that, the different stats can also be viewed in yet another way. Coloured bubbled tend to sit behind these dots mentioned above that display the level of activity of your phne that day. Bigger the bubble, higher the activity on that day. Although an interesting way to depict your mobile usage, but one can hardly do or learn anything from this data. This feature can be turned on or off from the settings.

A Familiar Status Bar
Status bar in the Ubuntu is almost similar to what’s found on other smartphones. It sits at the top showing time, battery, network and Wi-Fi strength etc. Pull it down and you’ll be welcomed by some quick setting tools arranged in a horizontal bar along with some unread notifications in case you have any. Everything is designed in a pretty neat and sophisticated manner.

However, this pull-down status bar also has a major flaw i.e. it is accessible at almost any time, even if the screen is locked and you’ve set a passcode. Anyone can simply pick your device and go through your unread notifications or change your quick settings even if the phone is locked. This is not really pleasing especially for those who are privacy conscious.

Scopes: The Soul of the Ubuntu Phone
Unlocking an Ubuntu phone will take you to ‘Scopes,’ which basically defines its user interface. Scopes are somewhat like cards that are filled with content that’s pulled from various sources. ‘Today’ card, for instance, will show today’s date, sunrise and sunset times, weather reports of the coming days along with a note of the coming public holiday and the scheduled events in your calendar for that particular day.

There are various multi-purpose Scopes, for instance the ‘NearBy’ card will tell the phone about your current mood, whether you are bored, thirsty, hungry, stressed, etc. If you are hungry, Scope will pull-out nearby restaurant info will suggest some nearby landmarks in case you are bored. The idea here is to simply get you curate results in the least possible time. Scopes are customizable as one can choose the number of cards he/she wants in the deck, their arrangement and the sources from which they’ll pull their content.

Though Scopes are designed to give the user a fresh personal experience, however, they seem extremely boring too. The multi-purpose scopes are basically white and gray with lists of information. No doubt, you can view a lot of info just in a glance, but at the end of the day, one hardly requires that info. Its widget-like user interface therefore might not please many especially when people have already developed their tastes and stay inclined towards the OS of their choice.

User Experience is a Big Turn-Off
Getting around in an Ubuntu Phone will heavily rely on swiping gestures. Swiping down from the top will expand the status bar and show notifications and quick settings. Swiping from the left will pop-up the vertical app tray which stays populated the core services, like dialer, contacts, camera and gallery. Recently used apps will also show up here while the Ubuntu button sits at the bottom waiting to be pressed so as to take you back to the home screen Scope. A swipe from the right will take you back to your last used app.

Though swiping gestures don’t pose many problems, however, they are highly sensitive. This means one will have to be highly cautious with his/her swipes while limiting the thumb to a safe section that lies in the middle. Its bezel-sensitivity problem can make navigation in Ubuntu a bit of a chore and it looks like it needs a lot of refinement before this interface can actually be called user-friendly.

The thing that’s most disturbing about the Ubuntu Phone is that it is extremely slow and clunky in comparison to other operating systems. Even core apps like dialer and contacts can sometime take forever to load and that’s mainly because the entire interface is so data sensitive. The Scopes tend to refresh every now and then and that’s the reason why it freezes.

Summin’ it Up
Ubuntu Phone will be hard to accept for the people especially when they’ve got so much used to the operating systems they’ve been using. However, in case of Ubuntu, the problem isn’t just with the interface. While Scopes is truly a new idea for the people, but with them being so content-dependant, the entire performance of the phone is jeopardized. These Scopes are always on the verge of refreshing and one is unable to make use of even the simplest features like gallery and contacts.

However, what one must remember is that the Ubuntu Phone is still a work in progress. The company is issuing updates every month and is relying on its current user base regarding the feedback and ideas. Right now, only three Ubuntu phones are present in the market ranging from $186 to $328 roughly. Ubuntu has been in hibernation mode for the development of this OS for a long time and it looked like they might be consumer ready now, however, after seeing the Ubuntu Phone it looks like they might be far from that scenario right now.