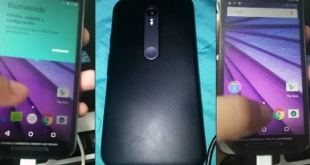 We all know that Motorola’s Moto G has been a tremendous phone since its advent. It has catered to many customers and has been a sensational hit worldwide. However, another aspect of the Moto G is that it has always been the worst kept secret and that’s primarily because of the Moto G (3rd Gen) whose rumours have been surfacing on the internet for quite some time, thanks to its fan following.

However, recently a Brazilian retailer accidentally posted the un-boxing photos of the Moto G 3rd Gen which have almost revealed everything about the phone leaving nothing to be get surprised of. The latest images confirm that the new Moto G will be having a 1.4GHz quad-core CPU which is more than current model’s 1.2GHz chip. The cameras will also get a bump as the new phone will feature a 13 megapixel shooter and a 5 megapixel front camera. The phone will also come with the option of colorful shells like it has always been in the case of Moto phones. It would also be safe to say that some new models will feature a 5-inch 720p screen, 16GB storage, dual SIM slots and even digital TV tuning (in Brazil’s case).

Although the leaked images haven’t left much to wonder about in case of the upcoming Moto G, however, it is still unclear whether one will be able to get more RAM and storage by paying a little extra. For all that’s left to reason out, we all should probably wait for Motorola’s July 28th event.