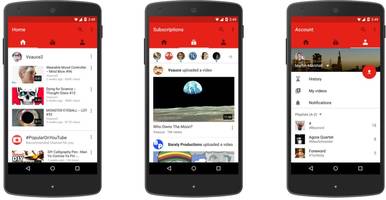 During a speech at the recent 6th annual Vidcon eventt, YouTube’s CEO, Susan Wojcicki, made an announcement that they are in the midst of releasing a new version of their mobile app. The app will be available on Android, leading mobile web browsers and on iOS too. It will make it extremely easy for the creators of the videos to publish and edit their content directly on the app and viewers will now be able to easily subscribe to a certain channel of their choice with a single touch of a button.

Since, it will be easy for viewers to subscribe to a certain channel with the new app, the channel owners will thus be able to earn the latest Diamond play button reward. The redesigned app will also place your subscriptions and profile at the top so that they are easily accessible for you. This version of the app will also help you to watch vertical videos in the full screen mode.

However what’s more interesting is that this app is bound to take things to a whole new level by providing support for 3D virtual reality videos just like the kind of videos we’ve seen from NextVR. That will be a step further than the app’s current 360-degree support. Watch time, according to Wojcicki, has risen to 60 percent across devices overall and a 100 percent rise has been seen on mobiles from last year. This is the reason why Youtube has so much going on internally so as to fuel that growth.