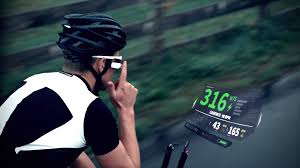 Long gone are those days when the term ‘advancement in technology’ was only meant for desktops and cellular devices. Today, that term covers a much broader category and fitness gears is one of them. Recently, various companies have shifted their focus towards the health conscious consumers of technological products so as to sell them fitness apps and products which are best for them. Recon Jet is one of them. However, what makes it different is that it has a sports computer fitted in some ridiculously good looking pair of sunglasses. However, will it possibly make an impact in the realm of wearable fitness products? Let’s check out.

Futuristic Looking Sunglasses
One simple glance at the Jet is enough to tell you that they don’t look like your regular pair of sunglasses. The computer module of the device sits comfortably at the right-hand side that includes the Jet’s camera, display, GPS, controls and the charging port of the device. On the left, a swappable battery is carefully tucked-in, which means it’s not next to the micro-USB port that is used to power the device. According to the company, the charging takes place through certain microfilaments that are embedded into the device’s lenses themselves.

All in all, the Recon Jet is just like a low-end Android smartphone that’s made to stick with your pair of sunglasses. It has a 1GHz dual-core Cortex-A9 processor, 1GB RAM and offers 8GB storage and has Wi-Fi, GPS and gyro sensors. Apart from that, the Jet also houses a 2.1MP webcam and a WQVGA 400×240-pixel display along with an infrared glance-detection sensor so as to help the unit save power.

Apt for Hardcore Athletes
The Recon Jet is basically designed for those who are long-distance runners and cyclists because the kind of data this device provides is extremely useful for such people. Casual runners and exercisers, however, don’t really have much to do with this kind of data. But in case you fancy such futuristic looking expensive devices which can help you provide that valuable info and let you click pictures while you are on the go, then the Recon Jet can be a great choice.

The device will only power-on if you are wearing it. Once that happens, it seems as if you are present in a video game. The Jet simply shoves all the data that it wants you to show into your right eye. By default, the screen will only show you the distance you have covered (in km or miles), time duration and your speed (in KPH or MPH) along with the calories burnt. One can tweak those setting anytime and in case you decide to pair it with a heart-rate monitor or a cadence sensor, you’ll be able to see these two stats too.

So as to sync your current progress with Recon Engage, the company’s official cloud-based fitness service, one will have to download the Recon Uplink on your Windows or Mac PC. Apart from that, the company also has its Android and iOS apps for providing easy functionality. Since, Recon was earlier bought by Intel, so one can obviously expect a great amount of attention to the hardware, however for the OS, the Jet runs on a custom ReconOS that works exactly one layer above Android.

Impressive Navigation Capabilities
If you are an avid runner or a cyclist and wish to explore new places, then the Jet can help you significantly. All you need to do is download the various maps from the company’s site and onto your device by plugging it to your desktop. However, what you need to know is that one cannot make a selection of more than 10,000 square kilometres. Maps can take anywhere around 40 seconds to a minute to load and once they are done loading, you’ll then be presented with an overhead map view. Though the maps don’t depict road markings which makes it entirely difficult to plot unfamiliar routes, but that’s expected to be fixed in later updates of the Jet.

A Camera: For Those Unexpected Moments
As publicized by the company, the Jet’s camera is basically for those instances when you are out and spot something that’s worth clicking. Jet’s camera can thus help you save you time that you’ll waste in getting out your phone and powering it on. However, what’s important is that the Jet’s camera isn’t designed for regular usage, thanks to a resolution of only 2.1MP. Images taken by it might show blurry edges and washed out colours, however, it certainly saves you time. What’s more, the images taken by it will be directly uploaded to Recon Engage.

The device can also shoot videos with sound, however, only for an instance of 15 seconds. The clips are smooth and decent owing to the camera’s resolution. However, the camera of the Jet is definitely not at par with the popular head-mounted cams from GoPro or Drift.

Some Competition Out There
The Recon Jet is a head-worn fitness device which is a new niche in its own. However, this device isn’t the only one out there. If you are looking for a gadget that you can wear on your skull for simply tracking your activity, the LifeBeam Helmet or the Spree Headband is great. But, if you feel like doing something more than just tracking your movement, then Google Glass can be a great option too except for the fact that Google has pulled them off the shelves, but they can still be found at eBay sometimes. Apart from that, there are other kinds of enterprise-level ‘smart glasses’ as well like the Epson’s Moverio Pro BT-2000 which is most likely to be priced way out from the hands of the commoners.

Summin’ it Up
Although there are plenty of things which need to be mended with the Recon Jet, however, the idea behind its technology is definitely not one of them. The company looks extremely involved with the Jet since they’ve been rolling out updates for this device ever since it arrived, however, they’ll need to make a few major changes before releasing a second-gen Jet. As for now, the product is just to exorbitantly priced for the local folks. The Jet is much suited for athletes, runners and cyclists who tend to spend a considerable portion of their day out in the Sun and that’s exactly the kind of audience the company should focus on.