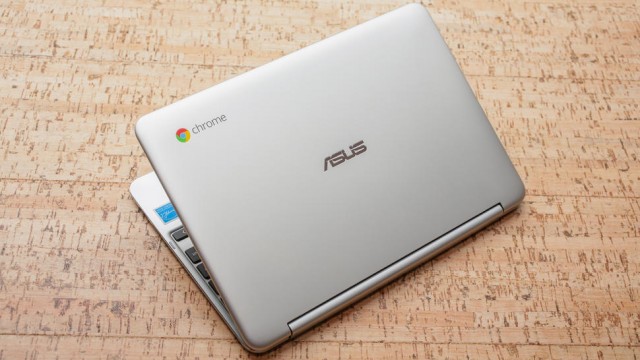 Though the two popular OS, Mac and Windows, have been dominating from a long time. Even then, Google decided to take their chances and stepped in the OS realm with Chrome. As an operating system, Chrome is definitely a competitive one and that’s exactly why more and more laptop manufacturers are now unveiling their own Chromebooks.
Nowadays, however, almost all Chromebooks have the same specifications on paper. From a distance, the new ASUS Chromebook Flip too looks like just another Chromebook. Having a closer look, however, can surely change your perspective as it is one of those few Chromebooks that offer a 360-degree rotational touch-screen. So, the question that lingers in the minds of the people is – will it be able to lead please Chromebook fans? Probably yes, let’s check out why.

Monumental Build Quality
The ASUS Chromebook Flip has a 10-inch screen with a weight that’s less than two pounds. This makes it quite similar to netbooks in weight and size. The Flip’s keyboard will remind you of those that could be found on ASUS’ Eee PC series. It has small, island-styled buttons which are about the same size of a fingernail and aren’t really comfortable for typing long passages. However, that doesn’t make it the worst 10-incher keyboard. Spacing between keys is generous and someone who’s accustomed of use the 13-incher can also easily use this keyboard.

The flip’s build quality, however, is much different from most netbooks. Forget the touchscreen, netbooks never had even these 360-degree rotational hinges. The Flip is much more solidly built than one would expect from a machine at this price point. It’s all metal and has a subtle brushed detailing at the palm rest that not only looks nice but also helps to mask smudges. The Flip’s screen, however, can be excluded from this rigorous build quality as it seems to wobble a bit. Although it’s not noticeable in everyday use, but you might come across it when you happen to use it on a bumpy train or bus ride. The resolution is just a mere 1280×800 which is certainly not the best amongst Chromebooks.

The hinge of the Flip is really sturdy that empowers confidence in anyone who is using it to flip the screen back so that it can be used in a tablet mode. The touchpad present in it is also pretty precise which makes it compelling for the user to use the Flip in the notebook mode. Using the Flip in whichever way you want is a personal preference, what’s important is that the hinges are solidly built in the Flip and that’s all that matters.
Apart from this, ASUS Flip is stocked well with ports of which most of them are stacked along the Flip’s right-hand side. They include two full-size USB ports, a micro-HDMI port, a micro-SD slot, a headphone jack. On the other side is the volume rocker and the power port.

Compromised Performance and Battery Life
Till now, the ASUS Chromebook Flip seems like a decent piece of hardware that has solid built structure, a mediocre quality display and a low price. ASUS obviously had to make certain cuts somewhere so as to balance it all and it looks like in Flip’s case that ‘somewhere’ is performance. The ASUS Chromebook Flip runs on a quad-core Rockchip processor which is basically a much cheaper option than the Intel Atom or NVIDIA Tegra Chips which usually power most Chromebooks. The base model that’s priced at $249 comes with 2GB RAM, but it’s better to add another $30 to buy the 4GB version.

Although the Flip lags behind some Chromebooks in terms of performance, but it’s definitely not the slowest. The Flip can handle almost everything that you would like to throw at it in terms of everyday use. With only 9 seconds to the login screen, start-up of this Chromebook is also pretty quick. What’s odd is that most of that time during 9 seconds is eaten by a long pause before one can see the ‘ASUS’ logo after which one is almost done booting up.

A Familiar Software
There is nothing much to talk about the software because Chrome as an OS has now become much more usable than any other OS, thanks to the steady improvements made by the company so as to popularise it as a product. Like we saw in Google Chromebook Pixel, the new updates Chrome OS is amazingly powerful and flexible to use. Apart from that, lots of services can now be availed in the browser like; Skype, Photoshop, Spotify and even messaging apps like Slack.
Chrome also allows its users to do a long list of things which no longer require you to be plugged-in to an internet connection.

Gmail, Drive, Google Calendar, Google Play Music or the Google Play Movies & TV are some such applications which can be accessed even if you are offline. The Chromebook setup might not be for everyone. There will always be some people who have become so much used to Windows or Mac that they can’t live without it. However, many are now realising that they can now survive on Chrome alone than they could a few years ago.

Summin’ it Up
ASUS surely has released a fairly decent laptop owing to the price category to which it belongs too. One can hardly find a Chromebook that good at this price. However, the flip might face some stiff competition too against the Acer Chromebook 13 which not only offers a longer battery life but also provides a 1080p screen along with a spacious keyboard. Toshiba’s Chromebook 2 is another exciting piece of machine in this segment that offers a low glare IPS display, a fast Wi-Fi with a decent audio quality. These models come rigged with NVIDIA or Intel processors which makes them slightly better in terms of performance than the Flip. Though ASUS’s Chromebook Flip has its own share of shortcomings, but if you are running low on budget and don’t mind trading these aspects, then the Flip can definitely prove to be a great choice.