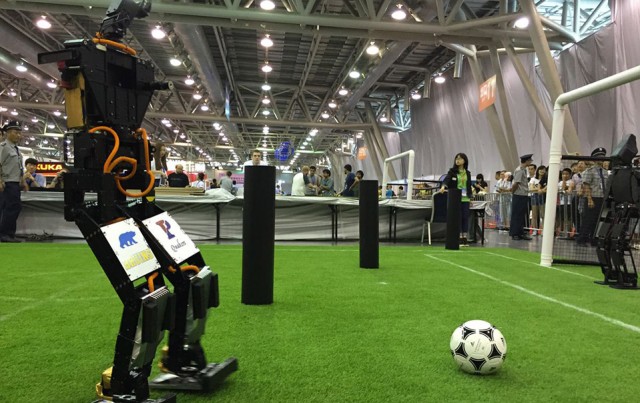 THORwin, a humanoid machine, might not be able to shoot and bend it like Beckham but when it’s about robotic soccer players, it surely is the best. This US-made machine just bagged the top prize in China for adult-sized category RoboCup this year in an international yearly soccer championship that’s especially designed for robots. This championship even aims to pit robots against humans by 2050.

THORwin, which is named after ‘Tactical Hazardous Operations Robot’ and Charles Darwin, is basically a five foot tall robot that weighs 119 pounds. Other contenders that belonged to the teen-sized and child-sized categories however were much smaller. The main requirement of all these robots was to be able to play autonomously, sense their opponents, dribble them and then shoot goals. Sounds very much like real life soccer, though the players in this game are stiffer, awkward and much prone to fall than humans.

THORwin, was the result of a joint project between UCLA’s Robots and Mechanisms Laboratory also abbreviated as RoMeLa and UPenn’s General Robotics Automation, Sensing and Perception abbreviated as GRASP Laboratory. It won in the finals against Iran with the score of 5-4. Apart from the RoboCup, THORwin also participated in DARPA’s Robotics Challenge a few months ago. In case you want to watch how UPenn’s little child-sized robot plays with ball, then you can watch the video below. This will surely explain as what we actually meant by these robotic contenders being ‘awkward’ on the field. Also note that this one is much smaller it is not the RoboCup champion.