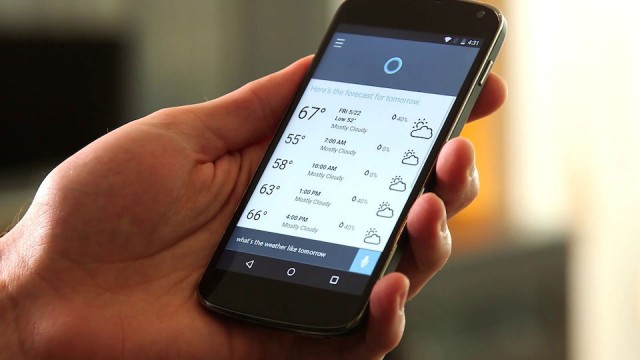 Microsoft earlier announced to release a version of their popular digital assistant, Cortana, for Android and iOS later this month, however, it seems like a copy of the Cortana App for Android has already leaked on the internet.
If you have familiarity with Windows Phones or the Windows 10 version of Cortana, you won’t find many surprises in its Android version. One can access Cortana’s notebook to simply control the information that’s stored about you and apart form that there are the regular options of bringing-up events, nearby places to eat out, news, weather, sports and more.

The entire interface of the Android version looks like a mini version of the Cortana that’s built for Windows 10 that has a dark theme with a blend of white area for the content. Cortana can be accessed just like any other app and with it you can use your voice for searching or entering queries. One feature, however, that seems to be missing is the ability of saying “Hey Cortana” in order to activate the voice assistant. Some features where Cortana can be asked to send messages to your contacts also appears to be unfinished, however, location-based reminders are working just perfectly.

Microsoft’s strategy of bringing Cortana to its rival platforms looks like a key part of their plans to win the mindshare of the users that are currently using iOS and Android. The company will also unveil Cortana for iOS later this year; however, an official preview version for the Android will arrive in the coming weeks.