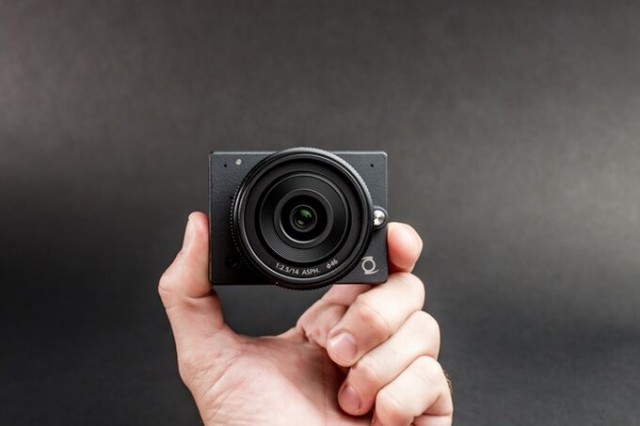 Every one of us has cherished that joy of clicking a picture and telling ourselves as what a brilliant shot that is. That’s why more and more people tend to switch to better cameras over a period of time.

This is exactly why leading camera manufacturers are facing a stiff competition between themselves which ultimately benefits the consumers as they are able to get a better device that’s abreast with time. However, while other companies of this industry are busy publicizing their ‘big guns,’ there is a company that’s making news for a totally different reason.

Yes, I’m talking about the brand new digital imaging start-up named ‘Z’ which is currently developing their debutant device named E1 which is the world’s smallest 4K ultra-high definition (UHD) camera. Although they have developed a prototype that seems much closer to the original product, however, they are currently seeking funding on Kickstarter for the remaining crucial aspects of the camera’s development.

The initial impressions of the device are pretty solid. It’s smart, sleek and exceptionally compact. Making a claim to the title of world’s smallest 4K camera is huge, but the E1 seems to be doing it with a lot of ease.

According to Jason Zhang, creator of the E1, the company Z was created in 2013 by a vibrant team of digital imaging and IT experts who had a collective aim of separating their company from traditional camera manufacturers. The E1 employees a micro four-thirds(MFT) sensor along with an interchangeable lens system that’s compatible with most of the MFT lenses today.

It also makes use of the most advanced autofocus systems that are available today. Pretty solid specs on paper, but let’s check out how this little camera stands out in the real world.

Design and Technology
The main aim of the company is to provide a camera to the people which can deliver stunning image quality without actually spending thousands of dollars. Currently, E1 is the world’s smallest 4K UHD camera with an inter-changeable lens system. Although still in its development stage, the E1 however looks much more like a final refined product.

It’s equipped with Bluetooth Low Energy (BLE) an Ambarella A9 image processor and advanced 3D noise filters that use Motion Compensated Temporal Filtering (MCTF) technology for reducing noise and jitter. This eventually enables this little shooter to take some pretty fascinating shots even in low light situations. The camera can shoot up to 102,400 ISO while at the same time maintaining a quality of 6400 ISO.

The team has behind the E1 has really worked really hard for designing this device. The E1 makes use of die-cast magnesium housing which is especially designed for dissipating heat and for providing rigid support to the highly demanding A9 image processor.

Performance and Compatibility
The MFT lens mount of the E1 makes it possible for this device compatible with various auto-focus lenses from leading brands like; Olympus, Panasonic Lumix, Sigma and Leica. Apart from that, it also supports various manual-focus lenses as well.

The advanced focusing technology of the E1 allows it autofocus for both photos and video. With its unique set of sensitivity settings, this camera makes sure that users don’t lose track of the subject while they are filming.

Connect and Control
The company has already launched their iOS and Android applications on the Apple App Store and Google Play. With these apps, users will be able to control, live stream and also manage their content via a Wi-Fi connection or through Bluetooth 4.0-enabled devices.

Another astounding feature of these apps is that users can leave their camera on a standby mode and remotely power it again with the help of these apps. This is something extremely unique.

The camera’s ultra-low 200-300 millisecond latency helps the camera to easily stream content to Android and iOS devices which eventually can turn out to be an amazing experience for those who wish to shoot documentaries or live events.

E1 can also be mounted on the standard 1/4”-20 tripod mount for the ease of the videographers.

By the looks of it, it seems like E1 is also perfect drone aerial photo and cinematography. Unlike the case with other cameras where pilots need to frequently land their drone for configuring their camera, no such hassle will be there with the E1. Pilots can with easy configure the E1 remotely which ultimately provides ease of travel.

Apart from configuring it, users can also power it on or off and download their content to a connected Android or iOS device while it’s somewhere inside the backpack or a pocket.

Z has also taken care of all those geeks who are always trying to explore those advanced options which other users are too scared to touch. They can easily customize E1’s functionality and rev-up its potential according to themselves through its open platform, the available software development kit (SDK) and its I/O ports.

Risks and Challenges
Being the first non-Japanese company to construct a 4K interchangeable-lens camera is definitely a big feat. However, the Z team did completed this challenging task in a pretty decent way, and let’s say did that in style too.

The company has gained more than 300% more funds through crowd-funding than the amount they requested. Apart from that, getting Ambarella’s latest A9 chip and Panasonic’s cooperation for embedding their sensor and their lens in the E1 were some high points in the company’s relatively short experience.

While they might have gained 300% more money than what their requested amount, however, the company still needs more so as to move their project from R&D to full-fledged manufacturing.

That’s not the only big challenge that lies ahead of the E1. In fact, there lies one which is about the same size as that of E1. Yes, it’s the GoPro. GoPro has been in the market for quite some time now. They have repeatedly upgraded their devices and made them better.

Launch and Availability
Currently, the company is only utilizing the crowd-funding platform for taking pre-orders and so as to introduce the brand as well as the product to the world. By doing this, they’ll also be able to gain a valuable market insight which concerns the E1.

After the completion of the Kickstarter campaign, the E1 (body only) will be available for $699 along with a kit that has a 14mm (f/2.5) lens which will be priced at $999. The company has also promised a 40 per cent off on the retail price of the camera for their Kickstarter backers, but this privilege is available in limited quantity whic is quite understandable.

Overall initial impressions of the Z E1 are that it seems promising; however without having to actually shoot the video and testing it fully, it’s hard to say if it’s as good as it seems. Till the product launches and we get one camera in our hands to check it out, I guess, we’ll just have to wait for some time, till the camera’s kickstarter launch is over. I’d love to see how it competes against big giants like GoPro and other new entrants into the exciting 4K camera market, only time will tell what this tiny yet powerful camera has to offer the world.  Stay tuned!