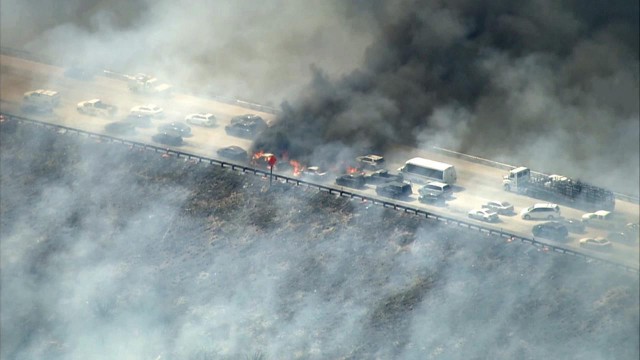 Friday’s wildfire in California that’s also being referred to ‘North Fire’ devoured around 350 acres of land, 5 houses and more than 70 abandoned vehicles. The respected authorities intercepted the situation at the earliest and swiftly ordered the aerial firefighting squads to take control of the situation, however, neither did they nor the people affected by the fire had expected that putting the fire out would be hampered by – drones.

Some handful of drone owners thought that it will be a great idea to fly their drones over the affected area at the same time when the aerial firefighters arrived there. The five drones that were spotted in the affected area were nothing but hobby drones. The firefighters were forced to circle the area for at least 20 minutes since they waited for the drones to return, however, they didn’t. Ultimately, the pilots had to throw away their loads and land.

The firefighting air units had to retreat as these drones are considered to be a potential hazard. In case one of them hits the plane or the chopper, then it could not only endanger the pilot but also the civilians that are present on the ground. Although there aren’t any confirmed injuries amongst the motorists that were affected as they all managed to run away from their vehicles. However, if someone did get hurt or killed because of the delay, the drone owners could possibly land in trouble.

Authorities are now searching for the owners of these five drones furiously as they are one of the many reasons why the wildfire ended up spreading on the entire freeway.