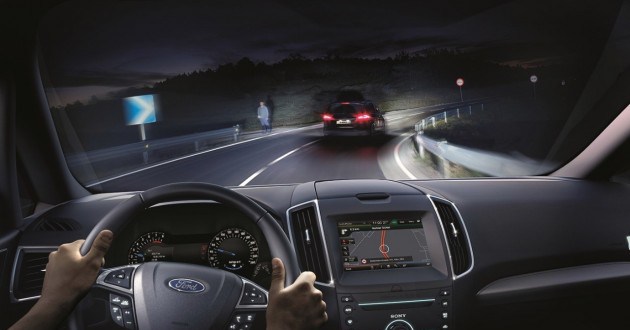 Ford is currently on the verge of developing some of the most advanced front-lighting technologies for its vehicles so as to prevent collision and keep the drivers and others on the road safe at night.

Amongst the many prototypes that they are testing currently, the first one is called ‘camera-based advanced front lighting system’ which takes inspiration from Ford’s two older technologies that were – traffic sign recognition and adaptive lighting system. By coupling them together, the company has surely transformed them into something much better as we can see in Ford’s this video:

This advanced lighting system can not only interpret traffic signs but can also make use of GPS info for widening the headlights’ reach around roundabouts. If GPS data is unavailable, then the system uses cameras for detecting lane markings so as to move the car’s high beam accordingly on the road’s curvature or in order to spot the dip in the road so as to illuminate them in a better way for the driver.

Their second prototype technology is called ‘Spot Lighting’ which is extremely handy while driving in those residential locations that don’t have street lights. The lights use an infrared camera which is attached to the grille of the vehicle for detecting people and animals that are present on the road by evaluating their body heat.
Ford’s new lighting system can be extremely helpful to avoid accidents with cyclists, pedestrians and canines. Not only will the car’s high beam throw a spot light on them, but the system will also tend to highlight them with yellow and red colored boxes on the car’s entertainment screen.

While Ford is still working on their ‘Spot Lighting’ technology, however, their camera-based front lighting system is totally ready and expected to be deployed in the coming future.