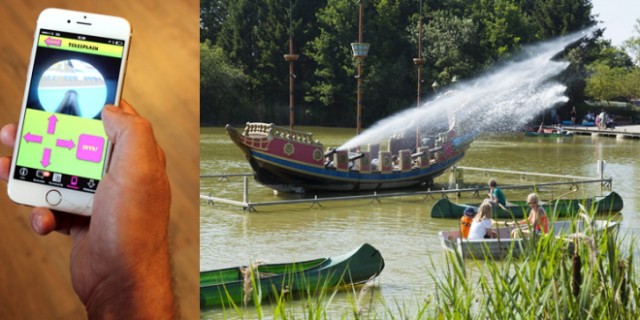 If you live in Denmark, you might probably know about Summerland Zealand too. It’s amongst the biggest water and amusement parks of the country. Going there on a weekend can prove to be ultimate fun. Nobody wants to sit at home and work when their friends are out there having fun in Summerland Zealand. However, if you happen to be stuck in that situation, don’t worry at all. Summerland Zealand has got you covered.

Recently, the authorities at Summerland Zealand unveiled the world’s first mobile controlled water cannon. With the park’s official app ‘Fidyguide’ one can control the water gun and spray with it on his/her friends or other guests that are in the park.

The mastermind behind this innovative yet clever idea is no other than the park’s own director, Kari Dyvekær. He said, “I’ve spent around three to four years on developing this unique system so that our guests can spray and play with our water cannon irrespective of whether they are in the park or at their home.” According to him, the mobile technology has a lot to offer and with this app-controlled water gun, they’ll make sure that their guests get the most unique experience.

Apart from throwing water on your friends and random people around the cannon, the app also lets you set the time of the volcanoes on their ride Amazon, feed the animals at the park and can help you find the various utilities in the park.

Amusement parks always need to stay abreast with time so as to stay competitive in the market while giving an enjoyable experience to the people at the same time and with their app-controlled water cannon, Summerland Zealand surely has raised the standards.