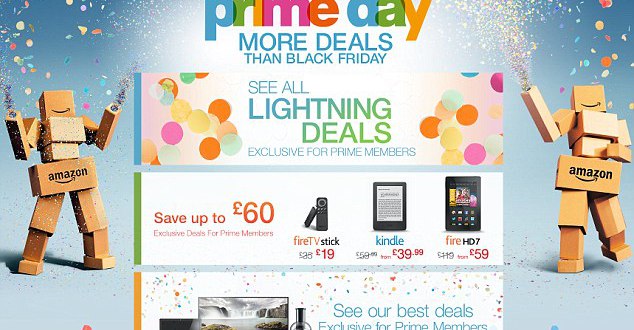 What is the problem with being a favorite brand? You cannot take things for granted, experimentation is not that easy, and the brand image is more prone to public embarrassment! And this reminds us of Amazon Prime Day Sale- an effort that went in vain because of the unsatisfied customers and digital shame.

Amazon came up with the idea of ‘Prime Day Sale’ that gave exclusive access to the Prime members on sales products of different categories. Too good to be true, the idea of this Prime Day sale was to feature the initiative as more of a ‘versatile deals than Black Friday’! However, the idea turned fruitless due to the shortage in product delivery and customer dissatisfaction from the sale. Alas, Amazon’s first-ever attempt at creating sales holiday on its 20th Anniversary went in hopelessness!

Amazon decided to celebrate the sales holiday concept on the occasion of its 20th Anniversary in the market. The idea of Amazon’s Prime Day Sale was somewhere in lines with the post-Thanksgiving sales rush in the US and Alibaba’s ‘Singles Day’ celebration. The thought of competing in the market and receiving excellent feedback was a close concern for the e-commerce giant, but contrary to the expectations, everything went worse for them. Prime Day sales created a huge roar and impact on shoppers who were all geared up to purchase quality products under lucrative deals.
So what all went wrong for Amazon?

Mobilemag.com Insight:
For an e-commerce business, nothing is more important than the word ‘reputation’ and ‘trust’ because it is what a brand shares with the vast range of customers! A low-quality deal in replacement to the image, reputation and credibility of a brand is rather silly. Amazon’s Prime Day Sale gave an excellent example of such a deal, and there is no doubt about it. While the deal was on, Amazon went ahead with an aggressive promotional campaign displaying the typical ‘Lightening Deals’ (that a shopper could see in the form big ads running on the websites). We don’t know what Amazon was up to while making the decision with the Lightening Deals- right now; the idea is nothing more than a ‘butt of joke’ among the shoppers. Most of the Amazon shoppers took Twitter as a platform to share a joke about the Amazon Prime Day Sale and the lightening deals. While most of the shoppers find the deal ‘boring’, others couldn’t find anything appropriate to buy.

No Good news for the Amazon? Wait before you say that!
It isn’t the trust- despite all the public embarrassment, retarded deals, shameless promotion and low-quality affection display, Amazon was able to score a hit in product sales during the prime day deals. Though the first ever attempt was a failure, the scope for improvement is always there for a brand like Amazon. It is indeed interesting to learn that the customer demand in the sale for the prime day was comparatively very higher than any routine day. According to Amazon, the prime day peak order rates were much better than the numbers of 2014’s Black Friday. During the prime day, Amazon suggested a sale of 10,000 Fire TV Sticks, 35,000 Blue-Ray Lord of the ring sets, 28,000 Rubbermaid sets, and about 4,000 Echo devices just within the 15 minutes of deal started. The sale of a Kate Space purse was made in less than a minute- and Amazon also sold 1,200 TV (that was priced at $999 each) within ten minutes of the sale. As per the Channel Advisor, Amazon’s daily sales in the US and Europe went ahead with a whopping rate of 80 percent and 40 percent respectively. Not to forget, Amazon’s Mobile Apps saw a significant jump up in the charts on iTunes and Google Play on Wednesday, and it was all due to the Prime Day sale.
It seems that Amazon didn’t lose the battle of money- somewhere down the line; the loss was of credibility and trust! The social media comments were ridiculing the Prime Day Sale, and it clearly reflected the frustration of buyers. The number of sales and application downloads reflected the interest of buyers in the Amazon deals. How many of them actually get converted to Amazon Prime Members? Who all are NOW interested in sharing a long-term relationship and engagement with Amazon? We still have to figure this out!