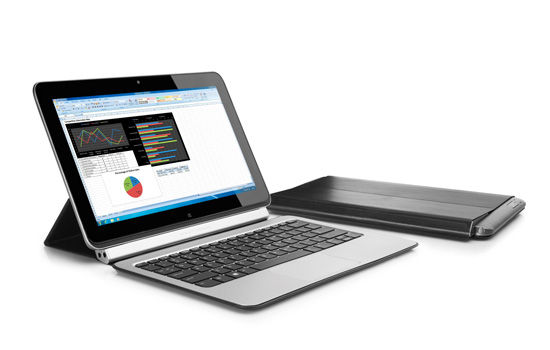 HP recently made a smart move by unveiling its Elite x2 1011 G1 which is a two-piece hybrid device which you can use in both ways i.e. as a notebook and as a tablet. However, it feels much more like some old heavy notebook when you take it in your hands and start using it. It’s 11.6 inches in size and has a sturdy build for which HP is popularly when it comes to its business laptops.

The central configuration of Elite x2 1011 G1 includes an Intel Core M processor, which is based on the fan-less technology. It’s further coupled with 8GB RAM and 256GB solid state drive. The display is an IPS one with a resolution of 1366×768. It’s therefore a notebook having a basic set of configurations which can surely serve well for common Web browsing and any kinds of office tasks like typing documents or viewing multimedia.

Battery life of this device turns out to be somewhere around 5 hours. Apart from that, there is another battery in the base that’s called ‘Power Keyboard’ by HP. This can further add around 3 hours to its life. Charging both batteries can take 4 hours which is definitely a very long time, however, the charger replenishes the tablet’s battery first which is great.

This one, therefore, is a typical business product by HP which is sturdy in build and extremely functional in design. Although it won’t be able to match the performance of Intel’s i-series processors, however, it will surely take care of your basic needs with great ease and style.