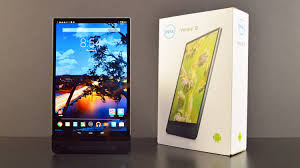 Dell’s latest creation, the Venue 8 7000 is an intricately designed tablet that also holds the title of ‘World’s Thinnest Tablet.’ However, apart from being the thinnest in the market, the Venue 8 7000 has a lot of other things to boasts about. It’s a power packed device with the much hyped Intel RealSense stereoscopic camera that’s never seen before on a tablet.

In terms of design, this is surely one of its kinds. Dell has grown bold and more experimental with its hardware design which is clearly visible on their 2015 Inspiron 15 and 2015 XPS. The Venue 8 7000 also points in the same direction. Although it’s the thinnest, but Dell hasn’t compromised on build quality. That’s exactly why it carries a little extra weight as compared to other similarly thin tablets, however, that sleek and solid construction makes it all worth it.

Though the Dell Venue 8 7000 can be outperformed by other tabs in the market like Google’s Nexus 9 and Nvidia’s Shield, however, it can still handle everything with ease no matter what you throw at it. Basic tasks can be performed swiftly and big, heavy games can be play like silk.

This is undoubtedly one of the best tablets in the market. Dell has got everything just right with this, whether it’s the price, the design or its unique camera. So, if you are looking for a tablet that you can boast about even 2 or 3 years from now, go for the Dell Venue 8 7000.