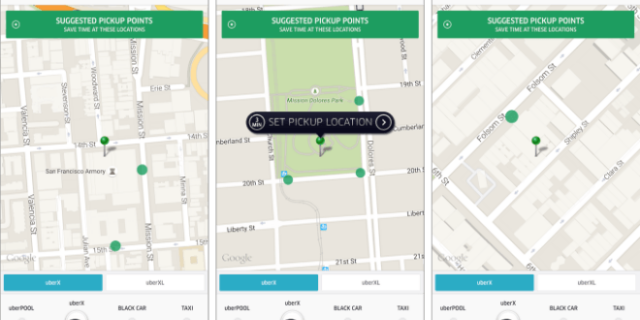 Uber is nowadays testing its new feature of ‘suggested pickup points’ where it will tell its users as where exactly they can be picked up from in order to save time. The company was testing their feature in San Francisco where if you tend to drag your pickup pin, the feature will tend to suggest and explain as where you can schedule your pickup from in order to save time.

The feature basically shows the nearby places where it would be quicker for the Uber driver to pick the passenger up. Users can simply drop the pin upon these green dots, catch the address of that point, and then simply walk till there so as to shorten their waiting time.

The suggestions tend to pop-up really quickly once you start dragging your pin around which makes things much more easy and satisfying. The design also seems to be intuitive enough for the users, rather than one which would baffle them completely. For these suggested pickup points, Uber seems to be using past pickup data where drivers can pull over quickly.

Currently, only some users are able to see this Uber’s new test, although it has appeared on iOS for uberX, uberPool and Uber Black Car. The company says more info regarding the update will be given soon. According to them, it’s not at all easy to implement a big update like that and it could take a few days to execute it on a full scale. This is totally agreeable and in fact the company deserves a merit just for the idea.