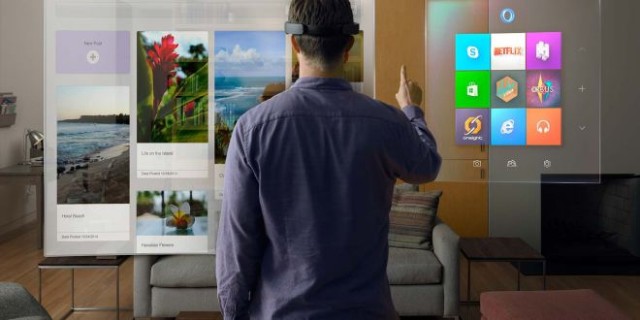 HoloLens is what Microsoft is calling its latest product that works on the principle of virtual reality. With HoloLens, Microsoft is planning to take-on Oculus, Sony and Valve. It looks like any other product that can be sold tomorrow, however, Microsoft reports that it is ‘close to the final hardware.’ If that’s the case, Microsoft might have to buckle-up, because their competitors are already planning to launch their products in 2016.

HoloLens is sleek, lightweight, beautifully crafted with arched plastic straps that tend to wrap very comfortably around the user’s head. It is also being said that Microsoft is determined to use its ‘futuristic product’ for advancing science and education. In fact the company also posted a video that showed how Case Western Reserve University would benefit by their holographic computer when it’s about teaching medicine.

Microsoft also stated that with the help of HoloLens, students could look closely at those anatomical models and walk around them to see how muscles, bones and organs work. Although there is still some time before students plan to don a HoloLens to complete their PhD, however, the video reminds us that it is definitely not a bizarre concept.
The product, though in its prototype stage, looks quite promising. However, the company will have to work day-and-night if it wants to stay at par with the competition, especially when other developers of VR platforms are suggesting their product’s release next year. No matter which company comes-up first with their product, one thing that we definitely know is that 2016 is going to be the year of the virtual reality.