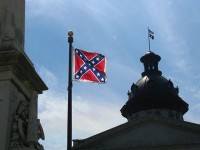 Finally, Apple has decided to remove the Confederate flag from the App Store! Soon after other major retailers like Amazon, Walmart, eBay, Sears and others have chosen to ban the flag, Apple stood ahead to eliminate games and applications that feature imagery of the flag. It is in context of the historical account of the Civil War!

‘
The decision to put a ban on the sale of Confederate Flag Merchandise is now mutual! In the wake of the unjust carnage of nine black parishioners at a church in Charleston, S.C. this month, most of the retailers have decided to remove the ‘much-speculated’ flag from their respective platforms. By now, Apple’s App Store is showing no app/game that goes in context to the civil war (that is using the Confederate flag). However, anything that uses the flag for the historical or educational process has not been removed. The idea of removing Confederate Flag is directly motivated by the illicit or offensive use of the flag. According to Apple, the practice goes against with the guidelines followed by the App store. Though Apple has initially removed the ‘Flag-driven’ apps and games, they will soon restore the same once the developers modify the changes as per Apple’s guidelines.

Mobilemag.com Insight:
We completely agree with Nikki Haley, ‘the flag was a part of an integral past but does not represent the future of our great state’! It is indeed a constructive step taken by the infamous retailers to stop the brand promotion of products that include the Confederate flag.

The developers take in using the Confederate flag-
While most of the developers are complaining about the abrupt removal of applications and games, the fact that is somewhere logical is related to their motive behind using the flag. A mere use of imagery cannot discourage or detect somebody’s motive for using the flag. Some of the developers have complained that the games aren’t offensive, and rather, the use of the flag is in context to the historical past. Apple’s criteria that define the degree of ‘offensiveness’ in a product is still wage and unclear!

Apple Banning- Not Universal
Apple banning is not universal in its origin. For some games (like ‘The Battle of Antietam’, TV albums of Primal Scream’s Give Out But Don’t Give Up, The Guardian Notes, Legend, and so on), the images of the flag are right there- which means that Apple has not completely rejected the Confederate flag in all the content available on the App store. Isn’t it necessary for a company like Apple to define the policy of removal before implementing the ban? On what parameters has Apple decided for implementing the change?

The beginning of a noble cause

Though it is true that Apple has not defined the parameters of app/game removal, the fact that the idea is driven by a noble cause is true to acknowledge. The call is to step against the evils of racism- to remove the symbols that stand against the peace of humanity. The idea was beautifully communicated by Apple’s CEO, Mr. Tim Cook, in the Tweet shared!
Similarly, Google has also decided to remove the context of the Confederate flag from the shopping and ad listings. As a part of company’s policies, Google has always revered the ethical concern in the content shared by the search engine giant. Just like the other e-commerce retailers, both the tech giants, Apple and Google, has extended their honest support for the noble cause.
Mobilemag.com strongly condemns the racist act of injustice that lead to the insensitive massacre- the loss is in the hands of human and humanity! While on the one hand, we completely favor the move taken by the brand retailers, on the other side; we can also feel the distress of the developers. Hope, Apple will soon restore the apps and games after the developers would implement the changes. Prayers for South Carolina!