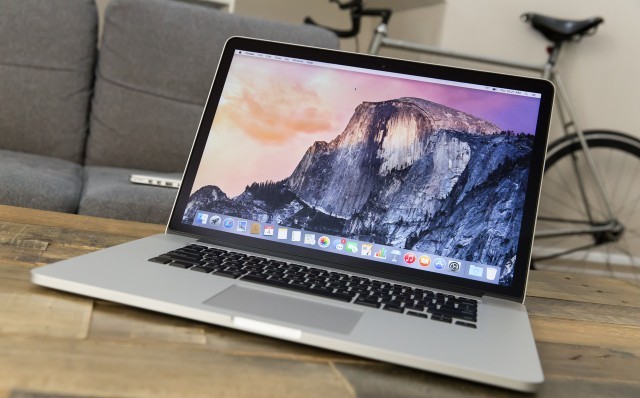 Weeks before the Worldwide Developers Conference (WWDC), Apple released the latest version of MacBook Pro that is powered with a 15-Inch screen and Retina Display. With super fast flash storage, durable battery backup, Force Touch Trackpad and power packed GPU, the new MacBook Pro is all that you need!

The upgraded version of MacBook Pro is here- with same old processors and design (yet with distinctive new features)! Powering a new model in a 2 year old processor, Apple decided to release the 15-Inch MacBook Pro with superior GPU and sophisticated PCIe 3.0 SSD. The upgraded version of Pro was released with the exact same chip as the company has been using in the previous devices. As per the speculations in the market, Apple was earlier waiting for the release of Intel’s quad-core Broadwell processors. The prolonged delay in the release of the chips was the reason why Apple went ahead with the same old processors.

The Design- The league of ‘Blissful’ Retina Pro Sight Continues!
Right from the onset, Retina MacBook Pro is a classic- a marvelous beauty that is certainly appealing to the mind and soul. Apple is proficient in compiling beauty with engineering; a practice where a machine is presented as a complete package of awesome design, winsome specification and power packed mechanism. With 15-Inch Retina Display MacBook 2015, Apple has by far extended the heaviest device of four and a half pound. The trade-off deal is in between the amazing display features and the size/weight of the design. On one side, the device has aesthetic appeal in the display, it has durable battery backup, and the graphics are refined. On the other end, the design is redundant, and the weight and size is an issue. Choose wisely according to your personal preferences! If you prefer extra screen space and creative touch, then 15-Inch Retina Display MacBook 2015 is the device for you. However, the design has nothing awe-inspiring- you will find the same old unibody with the aluminum chassis.

So What Makes 15-Inch MacBook Pro Special?
Force Touch Trackpad- A feature that is unique with15-Inch MacBook Pro, since none of its predecessors has used it earlier! The latest update of Force touch track pad allows a user to access new methods of input. It is based on how hard a user can press his/her finger on the device. As in for OS X, the feature would help a user in search addresses in Maps, browsing Safari, checking the dictionary, defining words and even previewing a link before opening it on the web.
Force Touch Trackpad uses pressure sensitivity in detecting the speed of scrubbing (while a person is browsing video and audio based content). As an approach, it is open to developers, and this is an advantage. For a user compiling video and audio based content, Force Touch Trackpad feature will eventually turn out to be a great feature.
Other than this, the top-end model of 15-Inch MacBook Pro powers an external display of about 5K at 60 Hz, that too with the help of two DisplayPort cables. We wish Apple to offer a 5K display of its own, rather than any third party assistance.

What is the biggest setback of 15-Inch MacBook Pro?
The only thing that was discussed right at the onset- MacBook Pro comes with the same old processors that were found in last year’s devices. We wish Apple would have waited for the launch of Intel’s quad-core Broadwell processors, and then it could have made MacBook Pro an absolute innovation.
There is no denying the fact, 15-Inch MacBook Pro is a less powerful machine with amazing display features and design. So, anyone who is interesting in a switch should prefer it. As far as the future is concerned, Force Touch Trackpad is there to rule the market soon. Let’s see how this technique will influence the future applications.