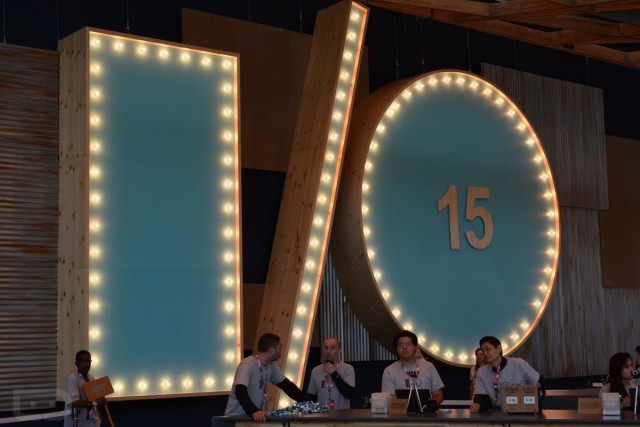 Gear up for a fine dose of excitement and surprises in the biggest software party- Google I/O begins Thursday, and as expected, the tale of rumors and speculations has already started. What Google beholds in the list of announcements is disclosed- yet to be exposed!

The two-day long Google I/O 2015 will start on May 28, 2015 in Moscone Center West San Francisco, CA! While the world out there would be up with a lot of expectations and hopes, Google must be planning to unleash a number of tantalizing concepts and products in the upcoming event. As a strategic event that will be presenting Google’s idea of a brighter tomorrow, Google I/O 2015 will be the delightful tech holiday for all android lovers and followers.

The dominance of Google can be felt almost everywhere- from information creeds on the Internet to fetching locations, having the smart access to phones, delivering optimum speed Internet, and so on. Since Google is influencing our life in more than many ways, it is evident for the tech giant to fall in the prey of public scrutiny. Let’s have a look at the prospective concepts and products that we can expect from Google I/O 2015!

The next innovative version of Google’s mobile operating system is estimated to be out in Google I/O 2015. Creating most of the buzz for Google, Android M is expected to overtake the existing Lollipop version that came last year. It is said that Google has raised high hopes from Android M, owing to the fact that it will come with universal fingerprint support. It is notable that Samsung has already implemented the change in their Galaxy S5 and S6 devices. Presenting fingerprint support at a level of operating system is a commendable job. It will pave the way for a superior authentication process, and since most of the devices will be implementing the technique (not just a few topnotch brands), the users will be at a beneficial spot.

Adding the fine dose of depth and refined robustness in its technological endeavors, Google is up with introducing Chromocast in the tech party. As expected, the company will throw some more light on Chromocast in Google I/O 2015. Chromocast along with Cast SDK is designed to access the needs of third-party manufacturers, who could construct a support for TV sets and speakers directed by the Android and Apple Apps.

The ‘Virtual Reality’ Trend
It reminds us of the Oculus Rift article that we wrote few days back- needless to say, virtual reality is in and Google cannot avoid the trend. Well, though the concept is similar yet Google has a different stack for the virtual reality presentation. Google has always focused on the bottom-up approach! It was last year when Google came up with Cardboard, a home-based hackable headset that produced 3D effects with the help of user’s Android smartphone. It is said that Google will make announcements related to virtual reality at Google I/O 2015.

The ‘Smart’ Wearable Category
Yet another market where Apple has a ‘strong’ stack is smartwatches! Google would definitely like to change it in their favor. Google’s Android wear made a fantastic debut in last year’s I/O- offering the choice of one wear-powered watch to all of those who attended the event, and also promised the delivery of Moto 360 in the coming year.

The Progress with Chromebooks!
Google’s Chromebooks (that is powered by Chrome OS) continues to launch fresh features. Being popular amidst the OEM partners, the product is making decent sales in markets like education. Google’s Chromebooks is heading towards Android for integration.

Parting Ways with the Rumors related to the release of Nexus!
It’s high time Google should shunt/accept all the rumors related to the potential
partnership with LG and Huawei for the upcoming release of Nexus phone. We would certainly like to hear Google’s point on the progression of the news. Google has already initiated the in-house Fi wireless service- making it expensive and completely uncalled for Nexus 6.

Mobilemag.com Insight
Let’s make a quick analysis of what we can expect from Google I/O 2015

Well, the list of speculations and rumors are never limited- we are sure that Google will surprise us in a better way, paving the way for more constructive expectations and hopes. What market demands from Google, and what user want in the form of service, Google knows it all; they are well-hearsed in their dealing and strategic planning. Let’s wait till the time the final announcements are made, and keep your fingers crossed.