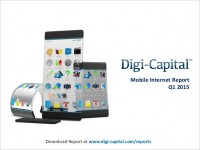 The mobile world is influenced by of 3 prominent ‘D’ factors- it has Depth, it is Dynamic and it is Diverse! As an industry that is said to hit the whooping $850 Billion mark by the end of 2018, mobile Internet revenue has something brilliant to promise. Digi-Capital, a mobile Internet advisory and consultancy service, presented a fresh analysis showing the trends and investments pertaining to the mobile Internet market. Let’s have a look!

You are in 2018- the world where smartphone sales have declined with a rate of 10 percent and the mobile network has witnessed a boost with 5 percent growth. Welcome to the ever growing world of mobile Internet! It is what Digi-Capital has to profess with respect to the mobile Internet market that is estimated to have more worth than Apple by the year 2018.

According to the analysis presented by Digi-Capital, the revenue for the mobile Internet industry is expected to rise with $850 billion by 2018, comparing to its last year growth of $300 billion. The revenue generated within the said duration will be three times greater to the existing growth rate.

What is the reason behind this growth rate?

Mobile as an industry is still evoking- it is growing and emerging at the same point in time! In such a situation, M-commerce is a sure shot engine for growth. Almost the half of the investment in the mobile market from past 12 months has been through the m-commerce sector. By the year 2018, the mobile industry will start influencing the alternate methods of revenue generation (as in for in-app purchases and so on). The shift from first to second and third phase in revenue hierarchy will open new chambers of success and growth. For app developers, it will refurbish the new business model full of opportunities.

An overview of the analysis:

The data clearly reflects the growth of enterprise mobility- though, it is not as fast as the rise of the consumer market. Good news for the wearable sector comes through the success of Apple Watches that help the revenue rise for the sector.

Digi-Capital analytical report declares mCommerce as the undisputed king of the mobile world in the coming days. With a market share of $200 Billion, mCommerce sales promise new heights for the rising sector.

It is notable that Asia’s market has surpassed the number of mCommerce users in 2014. Digi-Capital has estimated that the number of Asian users will share half of the space on the ‘goods and services’ section of the mCommerce industry (about $600 Billion).

The reason for this growth is the emerging middle class population in Asia- forming the wide range of potential buyers that can easily overshadow the class of U.S mobile shoppers!

Rising Platform– M-commerce is no longer the domain of few giants like Amazon or eBay! The rise of some small brands (like Flipkart, lenskart, and Alibaba) over the period of time has declared the vast potential of mCommerce. Meanwhile, some offline retailers have also realized the worth of having an online presence in nearby future.

The entire scenario has advocated brilliantly for the growth of mCommerce sector! Do you know about the story of Wanda E-commerce ( that was a joint e-commerce venture of Dalian Wanda, Tencent and Baidu)- and how it became a winsome $3 Billion business within the span of just four months?

Learn about the story in order to identify the tremendous scope and potential of mCommerce as an industry!

With the kind of change Facebook has brought forth in the mobile advertising scenario, it is certain that the industry will turn favorable towards advertising revenue in the coming times. Digi-Capital has suggested the rise of Mobile Ad Spend to $85 Billion by 2018- the rate of growth of mobile ad spend is much faster than the mCommerce market. While Asia will dominate the mCommerce market, America will influence the ad spend in a phenomenal way. It will beat countries like China, Japan, and South Korea in combination.

Digi-Capital has suggested that consumer apps revenue will rise up to $75 billion by 2018- in comparison to its current stack of $ 30 billion in 2014! Other than this, games will generate superior revenue comparing to the non-games section (however, that doesn’t mean a decline in the revenue for non-games sections). For the free applications available on the Android and IOS market, App-as-a-Service model will emerge as a winner- boosting the in-app purchase functionality.

It is indeed interesting to read about the future success of an ‘eight’ year old industry ‘Mobile Internet’. Beating the challenges posses by some big brands, let’s see where this growth leads- no denying, mobile Internet is ever promising and potentially mature.