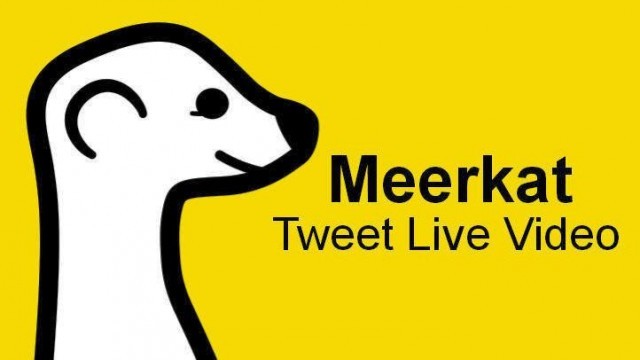 In the world of some well-established brands, workaholic startups and failing businesses, there came a power that started with a roar! The Rising of this power named ‘Meerkat’ is nothing but a commendable onset of a successful application in the reign of Mobile App industry.

Why Meerkat is a synonym of ‘awesomeness’? What makes Twitter conscious and scared? How far will Meerkat be able to pull this journey? Let’s analyze everything in detail!

As a regular Twitter user, you must be aware of the recent development related to the use of this latest application named ‘Meerkat’- that almost took Twitter by storm.

Meerkat is a mobile application, made for both Apple and Android platform, that allows a user to broadcast a live video stream to a social profile (as in Twitter). It can be done with the help of user’s personal smartphone or tablet.

The live stream video will be thereby posted on the user’s Twitter account, and it will be available for social scrutiny, commenting and discussing for a limited period of time. As per the company’s philosophical “ Everything that happens on Meerkat happens on Twitter”.

A 27 year old former architecture student from Israel named ‘Ben Rubin’ had conceptualized the application called ‘Meerkat’. Challenging the predetermined perceptions and fate of a startup, Meerkat stood the test of the time quite brilliantly, and is now said to be in the league of mainstream applications like Whatsapp, We chat, Twitter and so on.

Meerkat managed to be the ‘hottest’ topic of discussion in the influential SXSW (south by southwest) festival of Austin, Texas. Meerkat’s growth in the recent times has made Twitter skeptical about its own charm and reach.

You already know that Meerkat is a live video streaming application that allows a twitter user to post videos for a particular period of time. The process with Meerkat is quite simple- once a user starts a video stream, the application automatically drops the link in Twitter for making it shareable with your followers.

The video appears with a ‘LIVE NOW’ notification! The idea behind this application is to give you the benefit of ‘instant connection’ with your twitter follows- who can comment on your video streams.

These video streams are not timeless ( in fact they are only available for a limited period of time).

What you need to know about Meerkat:

·        A closing of about 1 million users.Whom Meerkat thinks they share the credit for this growth with:

With Twitter first and foremost- for the shareable platform.

And, Snapchat for doing much of the groundwork for  Meerkat.Why is Meerkat so cool:·        Because despite of the fact that Twitter has turned hostile, Meerkat still remains thankful to the micro blogging site.

·        Because it is particular with the way it works- live means live and not reruns!

·        Because a user can keep the streams locally on their personal mobile phones.

·        Because everyone can watch your live video streams.Team behind Meerkat:CEO and Founder: Ben Rubin

What makes us curious about Meerkat is the fact that they have tasted success so early in their journey. Can we guess the reason behind this instant success? Is it fate or is the magic of innovation?

Well, it wouldn’t be fair to label this success under the name of destiny because Meerkat deserved it in a simplest way. The reason being simple, we have not seen a single app in recent times that can offer more ease to use (and gratifies their needs instantly) than Meerkat.

Within the quick span of just three weeks, Meerkat has been able to stand gracefully where it is right now. And how can one forget the widespread response that Meerkat got during the SXSW festival- where most of the people were talking about Meerkat and was sharing a favorable attitude towards the application.

During the fest, Meerkat won the informal title of ‘App of the Year’. Pretty cool eh!

The entire process of automated plug in and push notification linked with the application has somehow affected the growth of application in a constructive manner. Twitter being aware of the fact, doesn’t want to feed a rival application’s user database.

As per Rubin, the CEO for Meerkat, the expectations of Twitter doing something similar were very high. Very kindly, Rubin has shared the onus of this growth with Twitter, saying that nobody can deny the fact that Twitter has a lot to help the application in the success journey.

However Twitter has its own plans and wants to be the solo leader, hence their acquisition of Periscope, which is also a live video streaming app available on iOS developed by Kayvon Beykpour and Joe Bernstein. It was bought in early 2015 by Twitter for a reported $100 million in early 2015.

In its quarterly earnings, Twitter chief executive Dick Costolo shared that in just the first 10 days of launch of Periscope, there were over a million people signing up for the live video stream app.

Twitter believes that they can kill Meerkat and with Periscope under its belt, Meerkat will not be relative. Check out this video below that argues this point.

The Audience for Meerkat:

The best part about Meerkat is it audience- that ranges from a commoner to a celebrity! Be it celebrities like Tony Hawk, Jared Leto or Aston Kutcher, all the users have widely accepted Meerkat. From a real estate agent to a church worshiper, the audience with Meerkat is diverse and deep.

Meerkat is growing, and there is certainly no doubt about it! Once in for all, if the application will be soon available in its full version for the Android operated smartphones – then the growth in users will rise like nothing else.

Meerkat is working hard to release a fully compatible version for the Android operated systems, and hopefully, the results will be out soon.

What Is The Future of Meerkat? Is Facebook Acquiring Meekat?

As per reports, Twitter is planning on going big with Periscope and claim lead in the area of live video streaming service. Will it blow Meerkat’s market or the application has already won the audience in their favor?

Many believe that this game is no where close over, some believe Facebook is looking to make its move.  There are many rumors circulating that Facebook is eyeing Meerkat for a big acquisition and the question of why should Facebook even buy Meerkat? Well that’s simple, because, Twitter bought Periscope — hello!

The other truth is that Meerkat is genuinely struggling since Twitter’s acquisition of Periscope, the fact that Meerkat has fallen off the charts and that App Annie, a mobile app ranking site, doesn’t even register Meerkat within its top 1500 apps in the U.S. is a cause for concern.

Hence Facebook would make for a perfect partner to get access to a social media platform that has 1.4 billion monthly active users now, compared to twitter’s 288 million, numbers confirmed by statista. Facebook, furthermore, has additional outlets where potential users could broadcast livestreams on already popular – WhatsApp, Instagram, and Facebook Messenger and further creating new opportunities for Meerkat streams.

Getting Facebook’s backing for direction, finances and unlimited resources to reach potentially a billion people would change the game back in its favor. We will all have to wait and see how this battle between Twitter and Meerkat enfolds and will Facebook make its big move soon? One thing is for certain, someone will definitely buy out Meerkat otherwise it will forever remain in Periscope’s shadow due to Twitter’s backing.

Prepare for lots of changes and breaking news on this story in the coming days, don’t be surprised if both try to provide new services or offer opportunities to lure and build up their audience.

What do you guys think about Meerkat? Have you used their livestream app? Will Facebook come in for this deal?