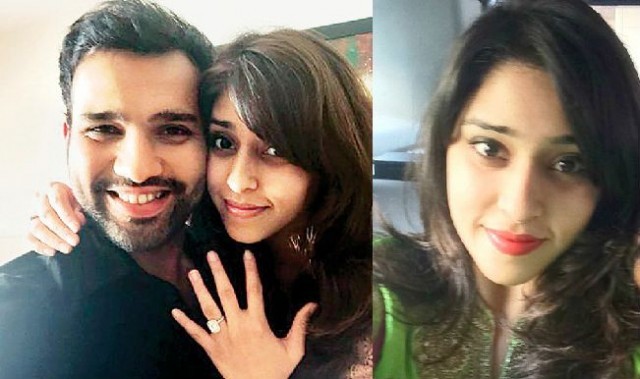 It was confirmed that the talented right hand opening batsman for Indian cricket team, 28 year old Rohit, proposed to Ritika Sajdeh, also 28 at Borivali Sports Club in Mumbai. Ironically the sports club is the same place where he began his cricketing career, making it extra special for him.

Rohit is a world class talented cricketer and his record speaks for himself. He is the only batsman to score two double hundreds in One Day international cricket.

He also holds the world record for the highest runs scored in an One Day International match where he scored 264 runs against Sri Lanka at the Eden Gardens cricket ground in Kolkata, India. Every cricket lover remembers that phenomenal innings where he beat the bowlers all over the park as he went to break the world record.

Ritika is a professional sports manager and has been managing Rohit’s career and sports engagements for the past six years, as long as they have known each other. It is believed, she also manages Suresh Raina’s sports engagements as well, another talented cricketer who also just recently got engaged too.

Rohit took to twitter as he announced it openly and didn’t want to hide his love. He tweeted a picture with Ritika who was wearing the engagement ring in the picture as he wrote:

From best friends to soulmates, couldn’t get any better.

Heartfelt Congratulations poured in from all over the world, especially his current and former team mates and popular acquaintances with the likes of Ravinder Jadeja, Yuvraj Singh and many others.

It seems like wedding season, we wonder who else from the Indian cricket team is next to announce their love.