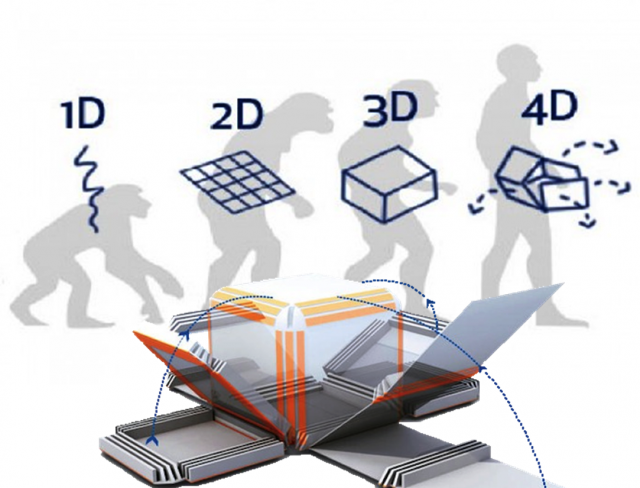 Innovation is the flavor of technology! We grow, we proceed further, and we learn more about the dynamic concept of change in time. It seems yesterday only when 3D Technology came to rock the user’s experience and interface in the most entertaining way. And today, the dawn of 4D technology through 4D printers has something new to promise. Let’s figure out the course of this prominent change in our times!

The news that you heard about 4D printers is true- yes, it has said to replace the interface of 3D technology as the engineers of ARC Center of Excellence and Electro Materials Science (ACES) at the University of Wollongong has informed the world about their latest innovation in 4D Printers.

While 3D printing has been taking the world by storm and being used for some pretty cool stuff and changing lives, for example 3D is now being used to build bionic body parts, or strong construction material or even inspiring young people to innovate like this teen who used 3D Printer to Make Robotic Prosthetic Arms for $500, giving people a new lease on life.

The revolutionary concept of 4D technology has a step by step processing; unlike 3D technology that is built on the piles of different layers on upon another, 4D is more like a transformation from one shape to another. Promising advancement in different fields like medicine, construction, robo science, automation and so on, the engineers at ACES has presented the technique to the world on April 24, 2015.

4D Technology as the future:

Professor Marc of ACES declared the value added initiative as ‘remarkable’! Since the device works without any assembly, it is relatively easy for the printer to develop a work processing that is direct and quick. The Chief Investigator at the ACES declared the concept ‘path breaking’ and ‘one of its own kinds’.

The group came up with the concept of combining a 4D device with around four different cartridges in a same time- this is nothing less than innovation on its own!

So if you think that the printer produces images or objects into the space-time continuum, then you are somewhat mistaken. Instead, the printer designed by the engineers at ACES prepares the objects in a manner from where it could bring changes on the basis of the material used.

Through 4D printers, the object in divided into several materials, whereby each material is taken as a definite unit.

What is the difference between 3D and 4D technology!

3D technology develops the structure of the object on the basis of layers- one layer upon another is designed to create a definite shape. According to the press release sent by ACES, 4D technology can develop one definite shape with the use of new materials.

The process is as simple as a kid transforming and assembling the different parts of a toy. The process is certainly a continuous phenomenon where all the prominent elements are essentially mechanical.  4D technology uses filaments in the interior parts that are sensitive in the terms of heat, pressure and over usage.

It seems like only yesterday, when just two years ago researchers at the University of Pittsburgh Swanson School of Engineering, Harvard School of Engineering and Applied Sciences and the University of Illinois had been granted US$855,000 from the United States Army Research Office to research and develop 4D printing. It was the future to be that was to be used for military reasons first as it may take upnto a decade to bring it to life for regular consumer use and the best of the best were asked to research further on it.

Crazy enough, there were some experiments already in place in other parts of the world, in Japan businesses were making effort to provide an increasingly immersive experience at the movie theaters that could not be mirrored at home, so select Japanese theaters were screening Iron Man 3 with the concept of Smell-O-Vision that was being dubbed as the and futuristic 4DX format.

(Side Note:  if you really wanted to, then you could really create a 4D experience at home as explained here.)

Well that was just two years ago, now just in Feb 2015, U K’s first 4D Cinema came in the name of Cineworld Multiplex, the world was happy to hear about the onset of this latest concept. The concept added the aspect of wind, fog, lightning and vibrations in the live experience of 3D and it feels like the future is here.

The experience of impressive special effects, forward/backward movement of seats, water jets, aroma in the air and floating bubbles is all that 4D technology brings in the cinematic bliss.  The onset of first 4D technology is marked back in 2008 in South Korea. Since then, the buzz with 4D technology has captivated human interest and attention in an alluring way. From Cinema to Fashion Industry, 4D is in the trend, and there is no doubt about this fact.

While most of the technology is still stuck with the 3D interface, the swift change and impact brought by the 4D technology is already viable. Almost a year back, Massachusetts Institute of Technology, Tibbits and researchers made an attempt at creating object-specific 3D printers.

The idea of converting a code into a ‘smart’ object that could easily assemble the change in shapes (with respect to the change in the environment) was close to the initiative. Within the span of a year, we have taken the legacy of technology forward- from 3D to 4D!

With the magical valves that could change the shape of surroundings according to the needs, the scientist at ACES have come up with a mind blowing concept. While we were already amazed by the 3D printing, ACES has taken printing to an all new level of excitement and comfort. The development has started processing the 3D printing material into a new structural base, and this is done with the help of water and heat.

What you need to know about 4D Printing Technology?

4D Printing prepares a structure on the basis of layers, before finally transforming it into a predefined shape. The initial step is same as we have in the 3D printing technique. But in 4D Technology, the transformation is a bit more ‘shape’ specific. The conversion is ‘sudden’ and the shape is ‘one’.

What particularly made us happy with this latest development is the fact that soon ACES will start working in the medicine field. The idea of manufacturing a valve that is responsive as per the water temperature is what the researchers from ACES are planning next.

The 3D printed structure will be provided with the ‘actuators’ that work with nothing but water as an element. Other than water, there is no other input method. As soon as the device detects that the water is hot, it automatically shut the system off.

The world will be a happier place if every day we wake up with a news of innovation! Learning new technology, accepting the demand of change, estimating the worth of a prevalent concept and preparing oneself for a fresh world is what matters the most.

Do you think 4D Technology has a promising future? How will it influence or daily lives? What will you use it for?

We will have to wait and see what 4D does for our future , in the meanwhile leave us a comment below or share this article with others. Thanks.