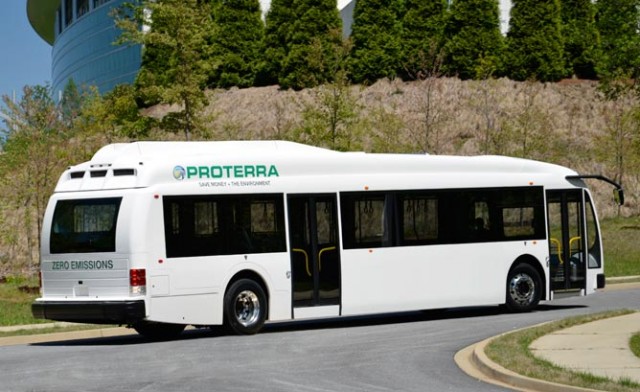 There are over 7 Billion people on Earth, it’s practically hard to even imagine how much poop and food waste we make everyday. And while this poop is discarded as ‘waste’, there are some who are trying to not only put it to good use, but actually make money of it as well.

Enter the amazing folks in UK, they have now taken inspiration from the human food waste and decided to power buses from it and help the environment. They have got a bus that travels from the Bristol Airport to Bath city center that is completely powered by food and human waste. The popularity of it has gone worldwide and they’re literally smelling the success of it. (no pun intended) 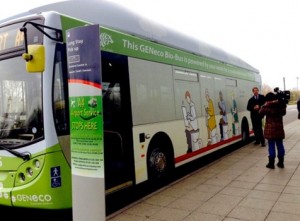 While there are already hybrid, electric and even hydrogen powered buses in many parts of the world, this is just different and very innovative. You might have heard about anaerobic digestion that involves the breaking down of biodegradable stuff by bacteria in the absence of oxygen. This methane-rich gas is a by product of anaerobic digestion. So when food and human waste is subjected to the process, we get bio-methane gas that can be used to power buses. How cool is that?

This poop bus (friendly known as) is manufactured by Scania, and has around 40 Bio-Bus seats that run of bio-methane gas. According to GENeco – a subsidiary of British utilities company Wessex Water – runs the Bristol sewage treatment plant that produces the gas. The Bio-Bus was preceded by GENeco’s Bio-Bug, a VW Beetle that runs on human waste. It is also the company behind the bus power supply that had this to say:

“(The bio-methane gas is) sustainable and powered by renewable energy, the bus can, travel a maximum distance of up to 300 kilometers on a full tank that is completely generated through the treatment of sewage and food waste that’s unfit for human consumption.”

The 40 seater bus comes with dome-like tanks on its roof that will be filled with the gas. This waste is processed by GENeco over12 to 18 days through a process of anaerobic digestion. Compared to many diesel engines out there at the moment, the bus emits 30% less CO2. 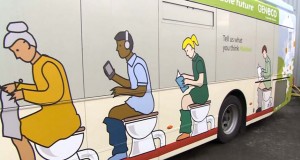 According to Mohammed Saddiq, Managing Director of GENeco, “If you are to run a vehicle on bio-methane, you will see a reduction in harmful emissions to the tune of 97 percent” that is a staggering number and something he believes that we must consider carefully for the long run as the the environmental benefits of using the Bio-Bus are clear for everyone’s betterment.

Bio-Bus has already made its debut and being loved by the people, these buses have been transporting passengers from Bristol Airport to the city of Bath regularly. Recently, the Bio-Bus was showcased in the center of Bristol, that is considered Europe’s Green Capital for 2015. People were very excited to see it and the bus took around passengers on short journeys through the city and explaining its benefits and operation.

“People think it’s a really wonderful idea: this thought that you can do something positive with human waste is amazing” James Freeman, Managing Director of First West of England

So what do you guys think? Do you want your poop to power buses around your city? Is this something that will be welcomed in US? Would love to hear from you guys, share your thoughts in the comments below.