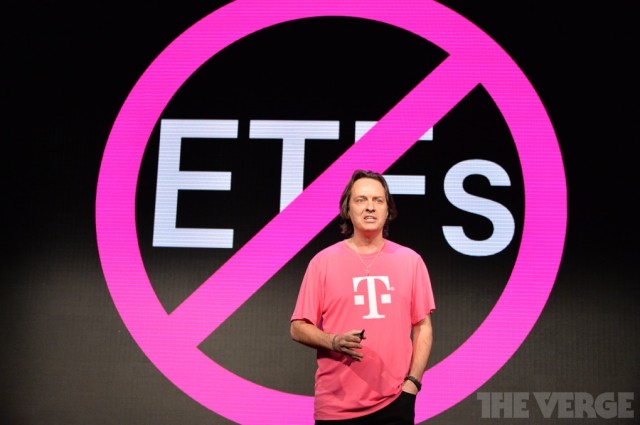 T-Mobile has a mission, they are going to do everything it takes to pull customers away from AT&T and Verizon.

They just launched a crazy new offering where they will pay off your entire balances owed on any financing that was originated to buy any smartphones or tablets.

It seems really enticing for many folks as this could be a good deal for many consumers who are tired of contract plans that impose a hefty early termination fee (ETFs).

So, is it as good as it sounds? Well, T-Mobile has already started to pay off those early termination fees for customers and they hope this will bring them long term loyalty.

CNET has confirmed that the new program will pay off devices bought under its competitors’ equipment installment plans and T-mobile has claimed that there are around 29 million customers that are pigeon-holed by other carriers because of these mobile smartphones and tablets device payment plans so this will be a huge freedom.

T-Mobile has planned to pay off upto $650 for all those who are stuck and want to move carriers but were prevented due to these payments owed on their devices.

Simply to say, T-Mobile needed something drastic to get back in the game and target their largest competitors in AT&T, Verizon and Sprint.

ETFs have been a huge pain in the ass for customers, people hated them since they feel like prisoners locked in to these carriers unnecessarily. ETFs were started as a way to lock in wireless customers for long term and even after numerous protests the carriers didn’t budge, they said, they had to charge these fees so they can get their money back for the devices they were giving as subsidies. Well, they have never been popular, least to say.

T-Mobile has been smart about these pain points of customers, last year they introduced their campaign with plans called “Uncarrier no-contract plans”, which also eliminated device subsidies and offered an interest-free payment plan for devices.

AT&T and Verizon marketed their own versions of this plan, AT&T called it “Next” and Verizon marketed it as “Edge”.  What these programs entailed was for customer to pay monthly installments for their smartphones and if they were to cancel their service in any way, then they were responsible to pay for the remaining balance in full.

While technically, this wasn’t an ETF, its impact was practically the same and continued to discourage customers from moving to better options with other carriers. These are exactly the customers T-Mobile wants to target and hopes with this new plan of paying off balances customers owe on their devices, they can inspire Next and Edge customers to move to them for long term.

So is this as good as it sounds, well here’s some details buried in the fine print.

How does one get this deal?

If you really want to get in on the deal, you have to give your devices to T-Mobile, the ones that have ETF tied to them. Then you have to buy a new one through T-Mobile’s own device financing but you cannot sell or give it away to friends or relatives.  Also the most T-Mobile will pay off on your unpaid previous balance is $650.

So it seems that T-Mobile will actually pay off your unpaid balance, however only up to the cap of $650. So if you bought a 64GB iPhone 6 or have any version of the iPhone 6 Plus that both cost over $750, that means you are not getting off completely, you may still still owe money when you switch to T-Mobile.

What if you have a two-year contract?

Well, then that’s different because if T-Mobile agrees to pay your ETF then you do not have to give over your existing smart phone to them and are free to give it away to your friends or relatives or even sell them. However, it still means you have to buy a new phone from T-Mobile but this could be a win-win for you since you get to keep the phone and still have T-Mobile pay off your existing contract.

So will you get Cash?

Well, not exactly, the way the program works is that customers must “trade in” their smartphones and tablets and no one but T-Mobile decides what the value of those devices is. Realistically, if they decided the value was less then you could actually still owe on your Edge or Next plan.

Once the value is decided, T-Mobile will issue you a credit instead that can be used towards buying a new smartphone, tablet or be used to buy a prepaid card to buy its services.

Is it as easy as it sounds?

While this all sounds very easy, its important to know that T-Mobile won’t be paying you on the spot when you sign up for their new plan. You will send them a bill and the company will pay you back with a prepaid card after you’ve bought their new phone. Not only that, you will be paying out of your own pocket to pay off your current carrier, be it AT&T or Verizon.

Is it worth it?

Smartphones and tablets can be sold on the market and there’s a huge demand for it. Before you fully agree to this offer by T-Mobile and sign on to their new plans, you should do some searching and find out what’s the price you can get on resale sites for your mobile phone and gadgets.

If you can get an offer for more than what you owe AT&T or Verizon, go ahead and paying off their balance, sell off your phones and pocket the profit cash all for yourself.

So what do you think of this new move from T-Mobile?  Are you stuck with an ETF? Are you considering making a move to T-Mobile’s new plan?  Share your thoughts with us and let us know.