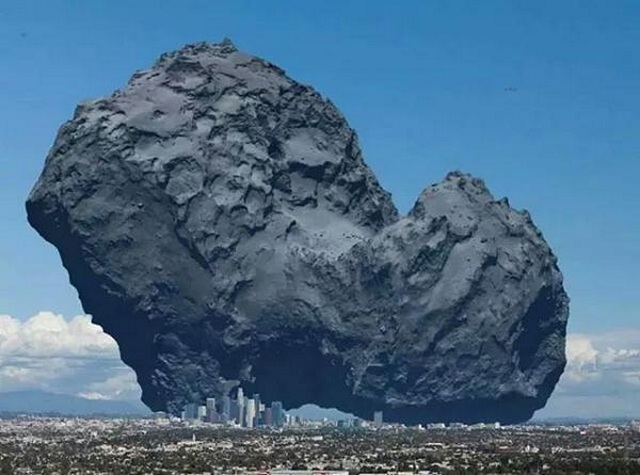 After seeing this selfie taken by European Space Agency’s Rosetta, the first satellite ever to orbit a comet, you might have thought that Comet 67P/Churyumov-Gerasimenko is not very massive. But it measures 2-and-a-half miles wide. And now, thanks to Matt Wang, we can see how huge the 4 billion-year-old comet is.

As you can see, the comet has been placed behind Los Angeles. You can imagine what Comet 67P/Churyumov-Gerasimenko will do to a city (or a planet) if it falls on one. The comet is currently 4 billion miles away from Earth. It reportedly is travelling at 40,000 mph and rotates once every 12 hours. Philae, in case you haven’t heard, landed on the comet yesterday after splitting from Rosetta earlier and it is taking samples from it at the moment. Philae is just as big as a washing machine.