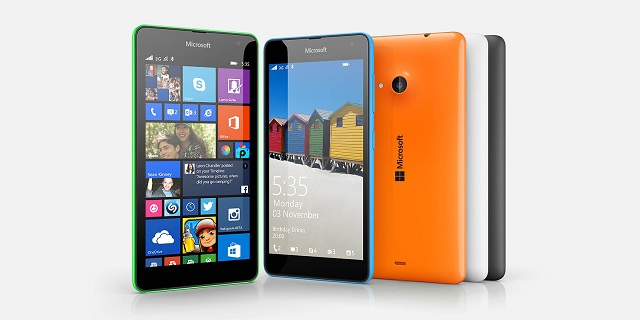 We knew that the first Microsoft-branded Lumia smartphone was coming. The handset is now official. Say hello to the Microsoft Lumia 535.

As expected, the new Lumia smartphone without the Nokia logo is a budget device coming with a price tag of €110 (under $140/around Rs. 8400). For that price, you can get either the Lumia 535, which is the single SIM version, or the  Lumia 535 Dual SIM. Both the models come equipped with a 5-inch IPS LCD qHD (540×960) display. You will get 220ppi, and there’s also Gorilla Glass 3 protecting that screen.

The Lumia 535 is powered by a 1.2GHz quad-core Snapdragon 200 processor and it also features 1GB RAM, 8GB of storage with support for microSD cards of up to 128GB, 15GB of free cloud storage, a 5MP rear camera with LED flash, a 5MP front shooter for all the selfie lovers, and a 1905 mAh battery. The handset will run Windows Phone 8.1 (Lumia Denim) and will be launched in China, Hong Kong and Bangladesh later this month. Other countries will be announced by the company sometime in the future.

The device is, as you can see, an affordable handset and has decent specs also. It’s probably a good selection if you are buying a smartphone for the first time. Most customers from the US and Europe might not be interested in the device, as it’s not high-end, but it can turn many heads on the emerging markets. So, are you interested in the Lumia 535? Share your thoughts in the comments below.