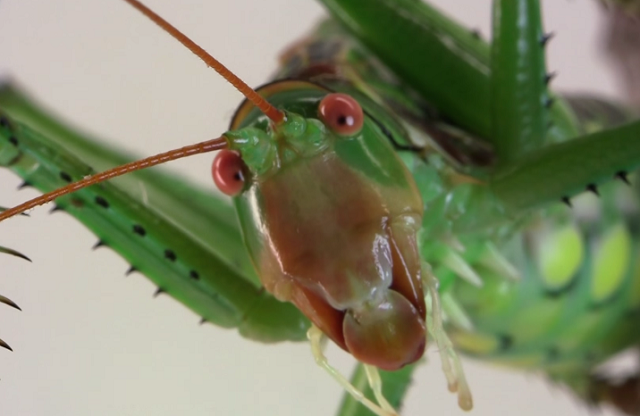 The close-up video we have here for you shows the Giant Texas Katydid (seen above) in motion on a tree. It’s a male and it can be seen grooming itself while it chirps (making a sound by rubbing its wings and legs together) to get noticed by the females. So what’s the big deal about a bug that’s trying to get a date?

First of all, it’s really fascinating to take a peek at this creature, which looks like an alien from a sci-fi movie, very closely. But the amazing thing is to see how it breathes. The Giant Texas Katydid has tiny holes called spiracles on its exoskeleton. The insect breathes through these spiracles. Air enters through the holes to reach a system of tubes called tracheae. The cells receive oxygen via these tubes and CO2 is released through the spiracles seen at the rear of the insect.