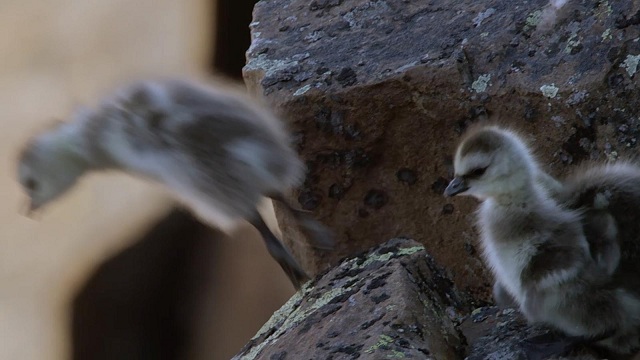 Imagine you are in nursery school and the only way to reach your parents after a class is by jumping off a cliff and plummeting more than 120m. That’s the kind of death-defying stunt that Greenland’s barnacle geese chicks have to do to get to their parents.

The extreme jumps of the goslings have been captured in UHD 4K as part of BBC’s Life Story. And it’s just amazing. As these geese chicks are unable to fly, after the jump they have to get into a controlled drop for a bit of time and then survive the tumble along the rocky wall.

Barnacle geese nest hundreds of feet up to avoid predators such as Arctic foxes. The geese eat only grass and as parents don’t feed their young, the only way for the goslings to survive is to make the daredevil descent.

Without robust wings necessary to fly down the cliff, the newly hatched goslings’ best chance is a lucky parachute-style drop. How the chicks land is the ultimate decider of life or death.

If the chicks bounce on their fluffy bellies on the way down, they are more likely to survive the impacts. They must be reunited with their parents on the scree slope below – then evade hungry predators.

You can check out the teaser clip by clicking here and tune into BBC One this Thursday at 9 p.m. to watch the full episode.