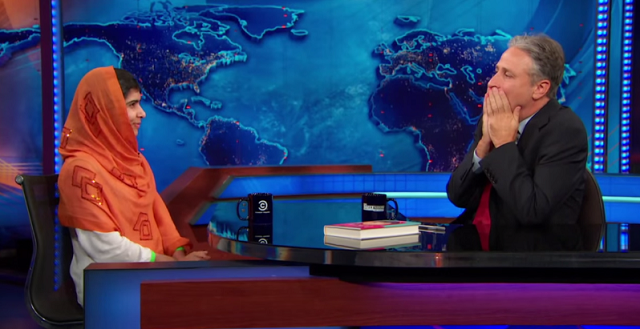 This year’s Nobel Peace Prize was awarded to Malala Yousafzai, 17, and 60-year-old Kailash Satyarthi, a children’s rights activist from India, for “their struggle against the suppression of children and young people and for the right of all children to education.”

Last year, Yousafzai was at the Daily Show where Jon Stewart asked her about the day she realized that the Taliban made her the target. And she gave an answer that left the show’s host speechless. This is what she had to say (at the 4:28 mark in the clip below):

I started thinking about that, and I used to think that the Talib would come, and he would just kill me. But then I said, ‘If he comes, what would you do Malala?’ then I would reply to myself, ‘Malala, just take a shoe and hit him.’  But then I said, ‘If you hit a Talib with your shoe, then there would be no difference between you and the Talib. You must not treat others with cruelty and that much harshly, you must fight others but through peace and through dialogue and through education.’ Then I said I will tell him how important education is and that ‘I even want education for your children as well.’ And I will tell him, ‘That’s what I want to tell you, now do what you want.’