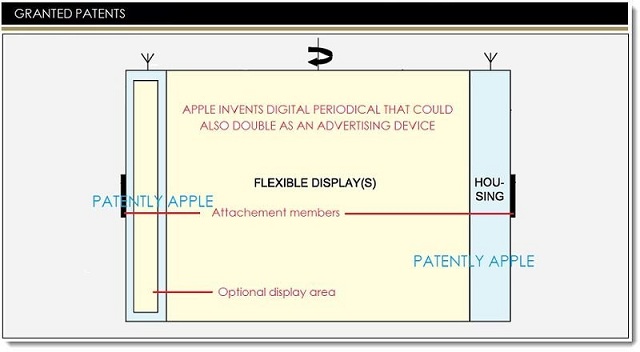 We have the iPhone, the iPad and many other products from Apple. But are they secretly working on a digital newspaper? Well, we don’t know. But the company has just been granted a patent for something which Apple reportedly calls a “digital periodical.”

It seems to be a self-updating flexible display that is useful for reading and advertising. According to the filing, the device is double-sided. That means both of its sides can be read. The flexible screen can be rolled up, so the “Apple Paper” will be portable. The device will get updates through MMS. Their plan is to break down content into separate audio, video, image and text files that will be sent via MMS. The “iNewspaper” will receive the files and reassemble them into the original content.

Apple is also saying that the device could be useful for displaying ads. As it can be rolled up, it could be placed around a light post for showing info to passersby.

Apple, of course, has this hobby of filing for a lot of patents. But we don’t see all those patents becoming devices available on sale. So we can’t say that the iNewspaper is going to be an upcoming Apple product.

Do you want to see a digital newspaper from Apple? Share your thoughts in the comments below.