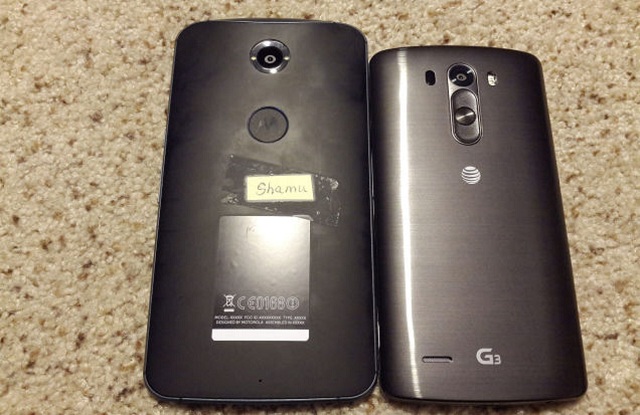 If you have been following all the rumors about the next Nexus smartphone, you might know that the tech world is expecting the device to be a 5.92-inch phablet made by Motorola. What you are seeing in the image above could be that handset.

The image coming to us from XDA forums is supposed to be showing the Motorola Nexus 6 or “Shamu”, which has been placed next to the 5.5-inch LG G3. As you can see, the Motorola handset is quite big.

If this device, which features soft-touch plastic on its back. is indeed the upcoming Nexus phone, it could have a 2560×1440 display, a Snapdragon 805 processor, 3GB RAM, 32GB of storage (there will probably be no microSD card slot, which was not there in the recent Nexus phones as you might know), a 13MP rear camera with 4K video recording, and a 3200mAh battery. Those are the rumored specs of the Nexus 6. The Nexus 6 is expected to run Android L. But that handset could also be just another Motorola device. It has no Nexus branding and is similar in design to the Moto X.

Meanwhile, HTC is rumored to be making the Nexus 9 tablet. Are you waiting for the Nexus 6 or the Nexus 9? Share your thoughts in the comments below.