There you have it. After years of hearing complaints from Apple fans about the screen size of its phones (the iPhone 5/5s came with only a 4-inch display), Apple has unveiled the new 4.7-inch iPhone 6 and the bigger 5.5-inch iPhone 6 Plus. You can find the things you want to know about the smaller version here. Let’s take a look at what the jumbo phone is all about.

As you might know, Apple’s iPhone 5 and 5S came with flat sides. But the iPhone 6 Plus features a rounded design. Similar to the iPad Air, it’s coming with pill-shaped volume controls. The display has a resolution of 1920 x 1080, and there will be split-screen modes on the home screen and in apps. But there seems to be no sapphire glass, which has been rumored several times in the past. The device is coming with “ion-strengthened” glass.

Apple’s biggest phone so far will be powered by the new 64-bit A8 chip, which, according to the company, features a 25% faster CPU and 50% faster graphics. But it is 13% smaller than the A7. Thanks to the improved processing power, the phone is coming with support for voice-over LTE and Wi-Fi calling.

The handset boasts a new 8MP camera. It features phase-detect autofocus, which should be useful for focussing considerably faster especially when you are shooting in low-light conditions. The device features optical image stabilization (it’s lens can move up and down and also side-to-side). In case you missed it, it’s digital stabilization on the iPhone 6, and on all the previous iPhones. So you will be able to take good images with the iPhone 6 Plus even when the shutter speed is slow. 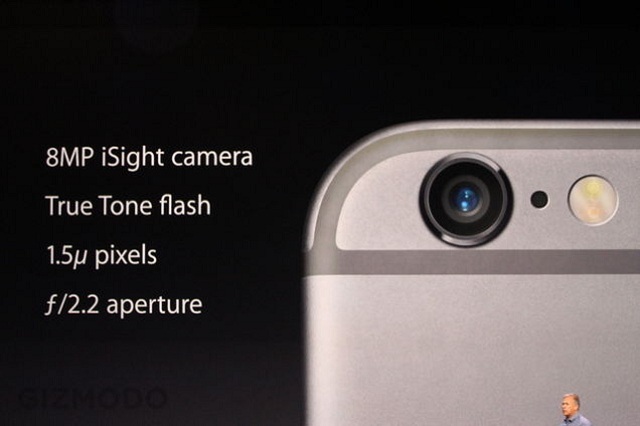