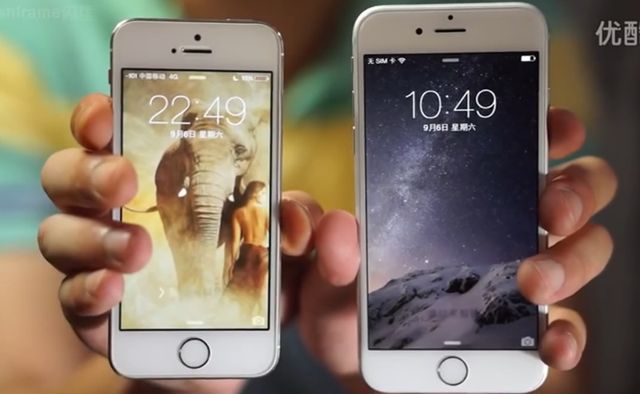 Apple will unveil their most-awaited Apple iPhone 6 (or whatever it’s going to be called) tomorrow. But it appears like some folks have already managed to get their hands on the next-gen iPhone, that is if the device in the video below is indeed the upcoming iPhone 6. There’s no way to confirm whether it is real or fake, but it does remind us about the leaks and rumors we have seen so far. Check out the video and it’s translation from 9to5mac.

One is an iPhone 5s and the other is, I’m not sure what it is gonna be called, probably the iPhone 6. You guys might be curious if this phone that I am holding might be a knock off or fake, but it does have an Touch ID, I (you) don’t think so? Let’s try and see that again.

The second thought is about the screen size. One might think that it is gonna be too big and needs more than one hand to operate, and Apple has done it with only one hand usage. (Not sure: By making the screen size taller to achieve it). Still feels comfortable using the iPhone just like the iPhone 5s.

Thirdly is the ‘radians’ (according to Google Translate) or ‘Bezel’ on the sides, somewhat like the Samsung’s I9300 (or SIII). Which makes it feels comfortably good with one hand. [Talks about technology of the screen with him mentioning “2.5”.

On the back, it still retains the design of the iPhone 5 backing of the 3 parts. And still on the back, the iPhone 5s camera is within the body of the phone, but the one on the iPhone 6’s camera is protruding outwards. Some may feel that it is ugly, but I personally feel that if the camera quality is better, it is something good too (or I don’t mind either).

Since there isn’t much apps or software running, the performance feels about the same. But if according to Apple, the internal specs would certainly be an increase. For that, we would only know after the event.

And that is all.

*Shows the different apps on the phone*

Unsure of the megapixel of the camera due to the lack of information.

The health app may connect to the iWatch.

And that is pretty much it.