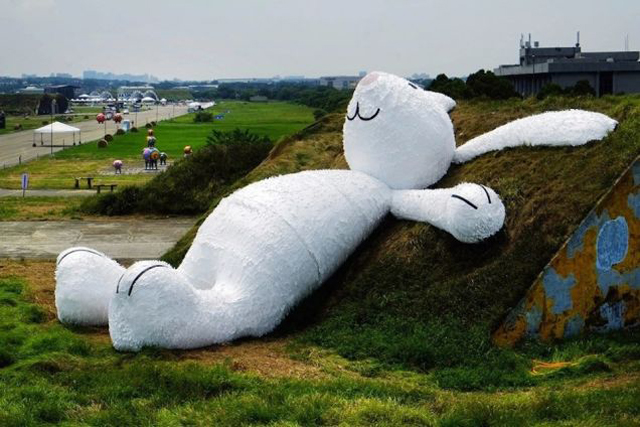 The Dutch artist behind the giant rubber duck and the giant floating hippo is back with his latest creation and it’s a giant animal this time around also. Florentijn Hofman has unveiled an 82-foot white rabbit in Taoyuan Taiwan as part of the Taoyuan Land Arts Festival.

Created with waterproof paper, styrofoam and wood, the sculpture is reportedly the artist’s take on the Moon rabbit, a Chinese folklore creature.

As the legend goes, a famous archer once shot down all the lights in the sky but one. The ancient deities, impressed by the archer’s skill, bestowed upon him an elixir of immortality. Not wanting to leave his wife, the man kept the elixir hidden in his home.This is where the legend starts to split, but jumping forward, the wife ends up consuming the elixir and in the process becoming a moon spirit. After ascending to the moon, she is kept company by the Jade Rabbit, an inhabitant of the moon. In most variations, the rabbit does nothing apart from keeping the wife company.

The rabbit sculpture is currently lying on top of an aircraft hangar. Hofman is expected to be at Taoyuan this Saturday, when he should explain some things about his work to the locals and art lovers.