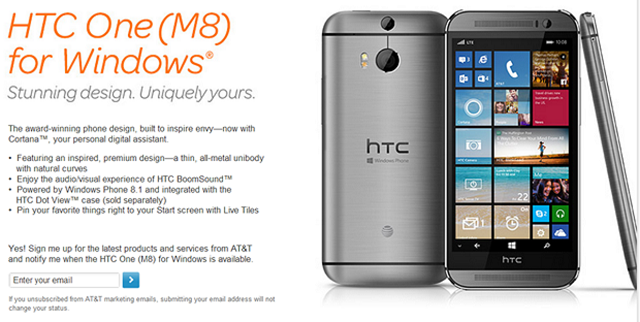 Worried that the Windows version of the HTC One M8 is a Verizon exclusive? Well don’t be, as AT&T has confirmed that the handset will be available on their network in the future.

AT&T hasn’t announced the pricing and availability of the device though, probably because they can’t do anything until the exclusivity period is over. But you can register here and the carrier will notify you when the device finally hits their network. Expect that to happen sometime this year itself as Jason Mackenzie, President of HTC Americas, earlier said: “Verizon is our exclusive launch partner, but our goal is to ultimately extend this product to even more customers later this year.”

And now we know that a GSM version of the device exists, so we might also get to see an international version sometime in the near future.

The One M8 for Windows has the same hardware as that of the Android One M8, except for the Verizon and Microsoft logos. Are you interested in the HTC One M8 for Windows? Share your thoughts in the comments below.