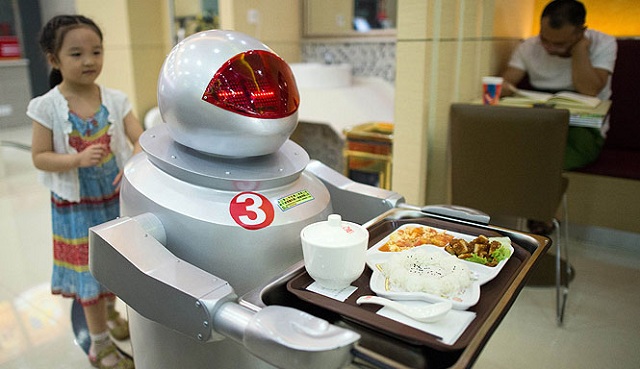 And The Father of the Year Award goes to Song Yugang, who recently opened a robot operated restaurant in Kunshan, China. “My daughter asked me to invent a robot because she doesn’t like doing housework,” says the doting father.

The concept of robots functioning as entertainers, greeters, receptionists, servers and chefs is not unheard of in China, as Dalu Robot Restaurant in the Northern Shandong province of Jinan is believed to be the world’s first such restaurant.

Similarly, on August 2nd, Suzhou, located at Renmin Road in downtown Kunshan of Jiangsu, witnessed its first robot-themed restaurant. The 340-square-meter restaurant currently has a total of 146 seats and 11 robots. The way these cute, round headed and chubby bodied robots greet the guests, take orders, stir-fry meat and vegetables and deliver meals to their respective tables according to the table codes entered in advance, is an astonishing sight in itself. While moving along the fixed black magnetic track in the restaurant they are even found putting up impromptu performances to keep the kids and their parents entertained.

Programmed to understand 40 everyday sentences, four short server-bots who are assigned to carry trays of food to the tables politely ask customers to move out of their way whenever their routes are blocked. Another major point of interaction is the entrance where two cheerful robots are stationed to greet the customers. Behind the scenes, i.e. in the kitchen, two large blue robots with glowing red eyes are seen diligently frying and another one makes dumplings with just a modicum of human oversight. 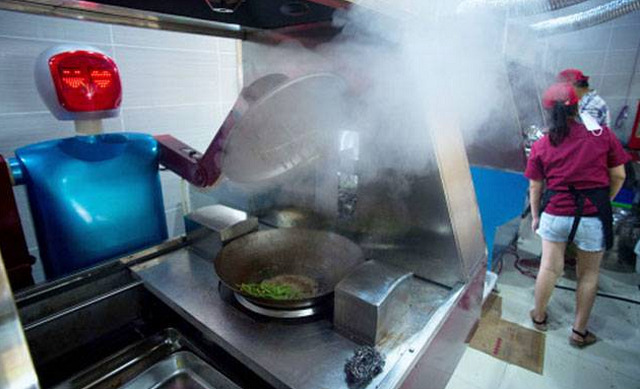 Last year China surpassed Japan to become the world’s biggest consumer of industrial robots. Rising labour costs is said to be the key motivator for major manufacturers to take refuge in automation.

What is really interesting is the fact that Robotics is capturing the service industry at a very fast pace as it is a big explosive market for them. McKinsey Global Institute has estimated that the application of advanced robotics across services, healthcare, and manufacturing could generate a potential economic boost of $1.7tn to $4.5tn a year by 2025.

Song told the local Modern Times newspaper that each robot costs around 40,000 Yuan ($6,500), which is roughly equal to the annual salary of one human employee. “They can’t get sick or ask for vacation. After charging up for two hours they can work for five hours,” he added. Such technological advances are definitely a matter of threat in the form of unemployment. But according to a report by McKinsey, policies discouraging adoption of advanced robots- by protecting manual jobs or levying taxes on robots- could limit their economic impact.

Finally, it all boils down to the fact that, “A business is as happy as their customer is.” Song’s customers are surely singing his laurels as they are super-thrilled by his automated minions bringing them even simple orders like fried tomatoes with egg, soup, and rice.