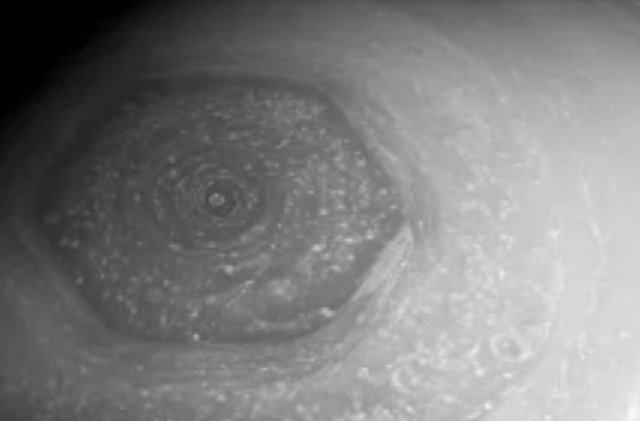 Saturn, the sixth planet from the Sun, is one of the most mysterious in the Solar System. And one of the things that has been making scientists on Earth be in deep thoughts about is the mysterious six-sided vortex on Saturn’s North Pole, which is massive enough to swallow four Earths.

Discovered back in 1980 and 1981 when the Voyager spacecrafts flew past Saturn, the hexagon-shaped hurricane is bordered by a 220mph jet stream. After Voyager 1 and Voyager 2 left, winter and darkness fell on the planet’s North.

Located at an average distance of over 1.4 billion kilometers from the Sun, the gas giant completes one revolution around the Sun in 30 years. Just ahead of spring on Saturn, in 2004, NASA’s Cassini spacecraft reached the planet. And now the Sun has started to rise over its North Pole and the scientists want to know more about the storm and what changes occur to it once its summer over there. For that Cassini will be taking a closer look at the North Pole this month, which will also allow the scientists to study Saturn’s aurora which happens to fall right on top of the hexagon.

So, why the Hexagon shape you wonder? According to one explanation, eddies, miniature hurricanes, created as result of friction with slower-moving atmosphere on the jet stream’s sides were causing the wave shape. Scientists were able to create the shape in the lab by using rotating fluids.