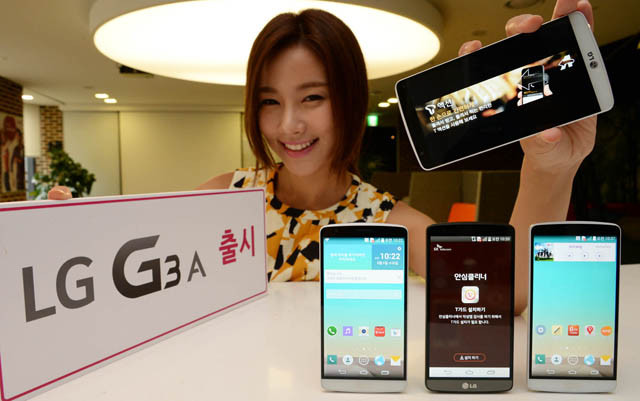 We have already seen a few variants of LG’s flagship smartphone, the LG G3. And now the company has officially unveiled yet another version of the handset. The LG G3 A is a smaller version of the G3 and it will be initially launched in South Korea via SK Telecom.

Unlike the LG G3, which features a stunning 5.5-inch Quad-HD screen, the new LG G3 A is coming with a 5.2-inch 1080p display. While the G3 comes with quad-core Qualcomm Snapdragon 801, a 2.3GHz Snapdragon 800 processor powers the new device which is also equipped with a 13MP rear camera with laser autofocus and a 2.1MP front shooter just like the G3.

Other features of the LG G3 A include Android 4.4 KitKat (KnockOn, Knock Code and “smart” keyboard are there), a 2,610mAh removable battery, metallic-backed design, 2GB RAM, and 32GB of storage with microSD support. The device, which will be available in white and titanium colors, will have a price tag of 704,000 won (around $670).

There have been no hints about whether it will be launched on other markets.