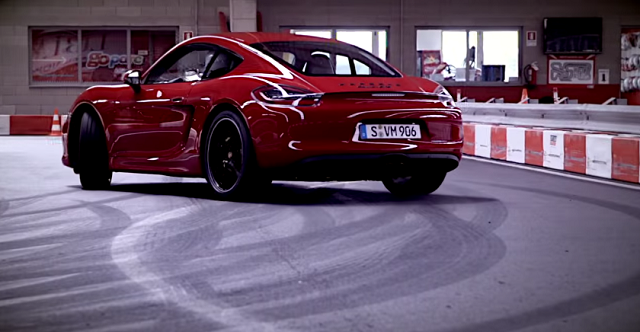 The Porsche Cayman GTS, with a standard Sport Chrono Package and a flat-six 3.4-liter boxer engine under the hood, packs a punch all right—capable of 340 PS (250 kW) & 370 Nm (273 lb-ft) of torque. And, like most Porsches, it should be nimble too. The company, however, wanted to clear all doubts about how agile the Cayman GTS is. So, they took the Cayman go-karting! Judging by the video, the GTS did burn some serious rubber on an indoor go-kart track in northern Italy.

The Cayman, which is capable of doing the 0-62 mph (0-100 km/h) run in 4.6 seconds and a top speed of 177 mph (285 km/h) with the standard six-speed manual transmission, negotiated the winding and narrow corners of the Mantova indoor karting circuit (the biggest in Europe) with some ease. Check the video out to realize the potential for fun this petite beauty possesses while being driven at full stretch on streets which would make most fast cars, and their playboy drivers, claustrophobic.

The grapevine is that Porsche is also working on a “GT4” variant with a 3.8-liter twin-turbo flat-six capable of 450 PS (331 kW). To pack so much power into the light frame of the GTS would be wishful thinking. So Porsche might limit the power a wee bit but it will still be higher than the current GTS. The GT4 is touted to come out with a fixed rear wing, more aggressive lines, and larger wheels, and is likely to be revealed early next year. To handle the added pace, the car is likely to be fitted with a function rear diffuser, larger brakes and a stiffer sports suspension.