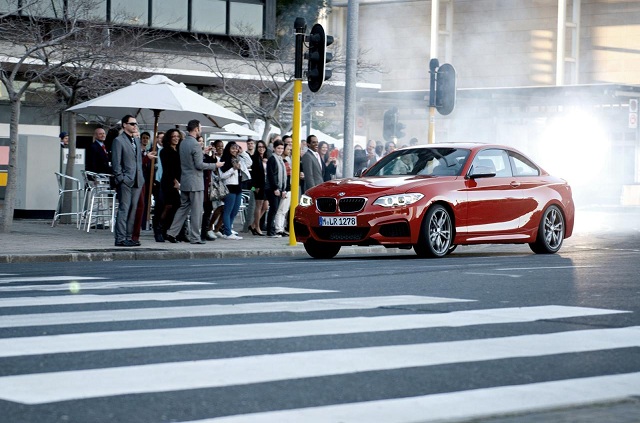 The tell-tale screeches from the over-worked brakes, smell of burnt rubber, and the surreal feeling of seeing a car defy logic and, at times, laws of physics while negotiating corners and turns and roundabouts. That’s drifting for you. And noise and smoke notwithstanding, we all are in awe of it if not in love (I am a smitten bloke though).

It’s that love which BMW is trying to tap into probably. In their “drift mob show”, organized in Cape Town, South Africa, five BMW M235i Coupe indulged the audience, and surprised onlookers, which included regular commuters, with some out-of-the-world synchronized drifting display. It was more a show of class or muscle than a sales spectacle, one felt, for the M235i doesn’t need such gimmicks.

As it turned out, the “drift mob show” featured five M235i Coupes in Melbourne Red color, with experienced stunt drivers including the likes of Rhys Millen and Samuel Hübinette behind the wheels.

The M235i Coupe is in the last stage of its production life. BMW will replace it with M2 by 2015 or early 2016. The M2 is another beast altogether and is rumored to deliver around 380 PS (279 kW) from a turbo inline-six engine. But till then the M235i is the range-topper of the 2-Series, and with the show in Cape Town, the Germans sort of reiterated it in style.

You will get the drift; just check the video out!