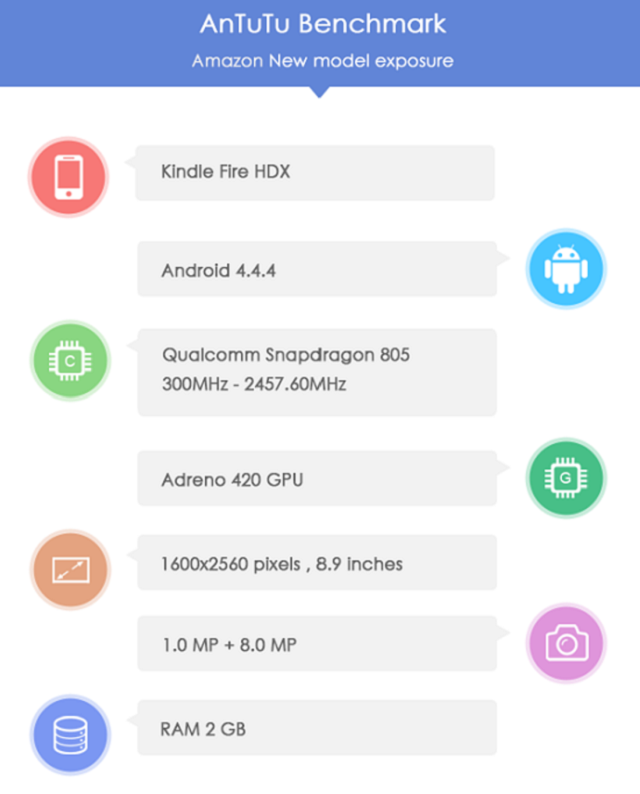 Amazon could be working on a successor to the Amazon Kindle Fire HDX 8.9 tablet. The upcoming model has reportedly been spotted in AnTuTu’s database, equipped with the Snapdragon 805 SoC.

Just to remind you, the HDX tablets out there at the moment feature a Snapdragon 800 SoC, with 4 2.2GHz Krait 400 cores and an Adreno 330 GPU. The new tablet appears to be powered by the powerful Snapdragon 805 quad-core processor (2.5 GHz per core). The chip will feature Adreno 420 GPU and the tablet will probably run Android 4.4.4 KitKat.

Other than these features, the upcoming tablet won’t be different from the SD 800-powered HDX. This means that the new model will have an 8.9 inch 1600 x 2560 resolution display, 2GB RAM and an 8MP rear-facing camera. So this new tablet is shaping up to be a refreshed model. Will you be interested in getting it if it hits the market? Share your thoughts in the comments below.