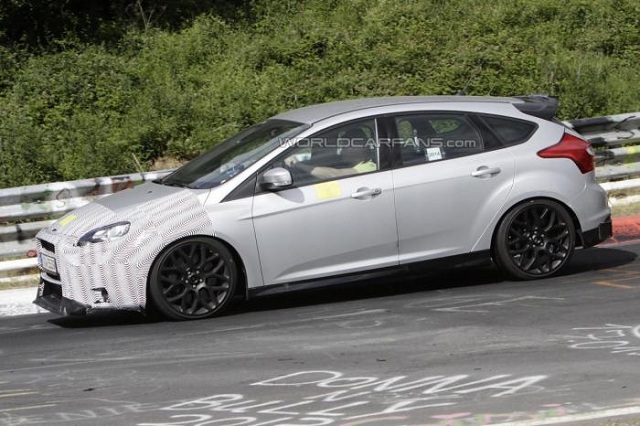 The new range-topper in the Ford Focus series, the Focus RS, scheduled for release in 2016, will stick to the front-wheel drive layout despite receiving a power boost, says a report.

The engine to be used is reportedly the 2.3-liter EcoBoost one sourced from the new Ford Mustang. Yes, you heard me right, the Mustang! The EcoBoost is capable of delivering 330 PS (243 kW), which in essence makes it 30 PS (22 kW) more powerful than the 5-cylinder, 2.5-liter turbo used in the previous Focus RS. The power will be transferred through a six-speed manual gearbox. With the amount of power at its disposal, stability would have been a problem, especially since it’s only distributed to the front axle. Ford’s engineers will add a mechanical limited slip differential, the chassis will be lowered, and the suspension tuned and made “sporty” so that the front-wheel drive layout can handle the power surge.

The RevoKnuckle front suspension, which is an adaptation of the MacPherson strut and is a Ford specialty, will be used in the Focus RS.