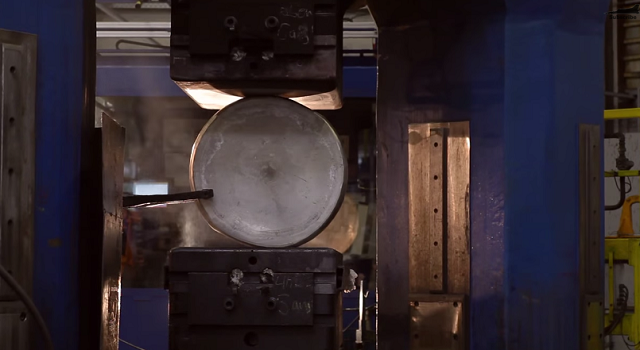 Speed thrills…Speed and the rush forces blokes to strap themselves onto rockets just to prove they are, well, the fastest! And then they are building the Bloodhound SSC, to attempt at the supersonic land speed record—their target being to reach 1,000 miles per hour (1,609 km/h) and beat the existing record set by Thrust SSC, which stands at 763.035 mph, by over 33 percent. Hmmm!

Bloodhound SSC, a British project, is currently in development. It is powered by a jet engine (Rolls-Royce Eurojet EJ200 afterburning turbofan), and a rocket (Nammo HTP hybrid rocket), together with a Cosworth CA2010 Formula 1 V8 petrol engine that acts as the auxiliary power source.

But they had one problem. They had to build a wheel strong enough to take a beating while the car, or shall we say a rocket on land, hits the mach mark and beyond. They also had to ensure the geometry (the contact surface to be exact) of the wheel had to have the right balance so as to enable the metallic wheel to dig a little into the desert surface, where they are planning to do the record run, but not too deep and lose speed. Though the venue for the record run is yet to be confirmed, test runs have been planned on the Hakskeen Pan desert in the Mier area of the Northern Cape, South Africa, where a track 12 miles (19 km) long, 2 miles (3.2 km) wide has been cleared. A similar, or maybe the same surface would most probably be used for the actual run too.

So how did the engineers go about it? They turned to rocket science or rather space science and used one of the hardest aluminum alloys ever made. They built a giant wheel made of solid aluminum (no rubber or tires involved). Just solid metal will be the contact point of the Bloodhound with earth, technically making it a “car” and not a jet or a rocket! Check out the video on the forging of the wheel.

Here is a comparison of the Bloodhound wheel with that of an F1 car and you will understand the enormity of it all.

It is clear why the Bloodhound wheels need more mass. To reach the 1,000 mph mark, the wheels would have to spin at unearthly revs. The bigger the wheel the lesser the revs required to hit a particular speed. So, naturally, the designers had to go for a larger wheel. Despite that, the Bloodhound wheels have an rpm around four times more than that of an F1 car in full speed. Also, the material used, aluminum alloy 7037 is one of the strongest around, and is used in spacecrafts and space construction.

Strength and physics have combined to produce a marvel of a wheel for Bloodhound, and understandably so. You don’t want your wheels to buckle on you while doing 1,000 mph! Seriously!