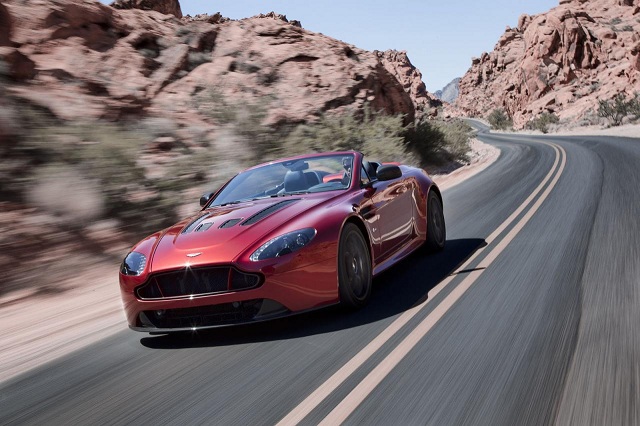 Yes, the name says it all. True to tradition, Aston Martin has unveiled the new V12 Vantage S Roadster, and the British marque calls it the “fastest and most potent” roadster ever after packing it with a 6.0-liter V12 engine that develops 565 bhp (421 kW) and 620 Nm (457 lb-ft) of torque.

Let’s talk about the engine first before getting into the cosmetic details. Why? For I am an engine person and we are talking about Aston Martin here, a marque, which James Bond drives around while chasing terrorists before crashing it. And Bond doesn’t settle for lesser muscle, does he?

There are a host of other performance enhancing components, which keep the Roadster stable at speeds close to 200 mph. It has an adaptive damping system, a two-stage anti-lock braking system, carbon ceramic brakes, and a three-stage dynamic stability control system. Then there is the Sport mode that, according to Aston Martin, “alters throttle response, gearshift speed and timing, and exhaust note to, once again, tune the character of the car to the driver’s requirements.”

That’s damn smart. But will that kill the character of the Roadster?

Anyway, let’s get to the body. And, one has to admit that the Roadster’s body looks and feels racy too. The new Aston Martin V12 Vantage S Roadster owes its pedigree to the V12 Vantage S Coupe and a couple of features from the CC100 Speedster concept. The new roadster features a ventilated hood, Aston Martin’s traditional titanium silver or black accents, and carbon fiber components to give it that extra edge in the weight and rigidity factors. The Vantage S Roadster also has an aggressive grille inspired from the CC100 concept.

The interior carries over from the earlier model but has new seat and door trim, There is an optional carbon fiber package which brings with it a carbon fiber trim, carbon fiber door handles and black alloy pedals. There is option for Q customizations such as black anodized switchgear, and body color carbon fiber bonnet louvers.

The car will definitely burn rubber as well as the pockets—the reason why Aston Martin is acting pricey about revealing the price tag. The V12 Vantage S Roadster will go on sale later this year and Aston Martin will reveal the price at launch.