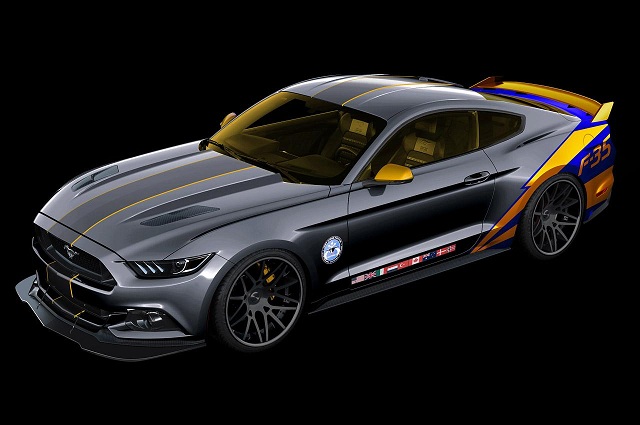 What is better than a Ford Mustang? A truly special one-off Mustang! It gets better. A one-off Mustang featuring a Lockheed Martin F-35 Lightning II theme… Oh, mama!!!!

Well Ford has come up with exactly that, and will be exhibiting the one-off 2015 Mustang at this year’s Experimental Aircraft Association (EAA) AirVenture in Oshkosh, Wisconsin. The one-off stallion will be auctioned at the Gathering of Eagles charity event at EAA AirVenture, and all the proceeds will be donated to the EAA Young Eagles program (a non-profit organization in charge of providing free flights). Since 1992, almost two million people have benefited from the program.

That’s noble of Ford. But the car’s more devilish, bad to the bone rather, than noble. After all, it is a Mustang that looks like a fighter. Preparing aviation themed one-offs is not new for Ford. In fact, they have a history of doing so. The F-35 themed Mustang features matte titanium body paint scheme with yellow and blue accents, similar to the fighter.

Prominent changes outside include bigger front splitter made of carbon fiber, special decals, rear diffuser and yellow tinted glass. On the inside, the special one will have Recaro bucket seats together with other tweaks.