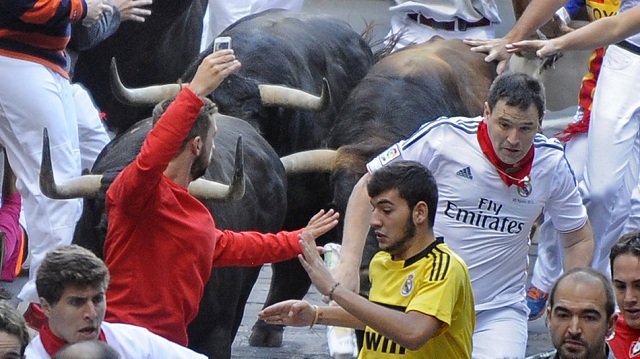 Humans get bored and that’s why there are festivals like the running of the bulls in Spain. It is, of course, very dangerous to be in front of some bulls charging with the intention of killing you, but one man took danger to a new level. He tried to take a selfie during the bull run in Pamplona.

As you will see in the video below (at around 2:08), the man, seen in the photo above, took a selfie while the bulls were directly behind him. It’s dangerous (each bull weighs more than half a ton) and apparently is also illegal.

A law was passed this year by the northern region of Spain for putting an end to filming during bull runs. According to the law, anyone who films or takes photos during the bull run and endangers people’s lives could be asked to pay a fine of up to $2,050. Reportedly, three Brits have already been fined. One of them used a drone to film the bull run and he ended up paying 650 euros.

At the moment, police in Pamplona are looking for the guy in the image. They probably might find him soon, after he posts his selfie on Facebook or Twitter.

Are you someone who likes to take extreme selfies? Share your thoughts in the comments below.