The British challenge against the German supremacy in sedans is slowly but surely getting its final touches. The 2015 Jaguar XE, touted as a challenger to the German trio of BMW 3-Series, Audi A4 and the Mercedes C-Class, was spied during last-minute testing ahead of the much-anticipated unveiling, most likely at the Paris Motor Show in October.

The Jaguar sedan will use the newly developed lightweight iQ[Al] platform and will be powered by different versions of 4-cylinder Ingenium engines, along with a 3.0-liter V6 motor and possibly a 5.0-liter V8 supercharged engine (yummy). The monster engine is rumored to be planned for the XER-S variant that will unleash 542 bhp (404 kW). Hmmm… Yummm!

From the spy images it is clear that Jaguar has borrowed quite liberally, or rather boringly, from the larger XF and XJ models—a sculpted hood, LED-infused headlights and a prominent front grille being tell-tale signs of the lack of originality.

Paris will reveal the exact package the Brits are planning. Fingers crossed! 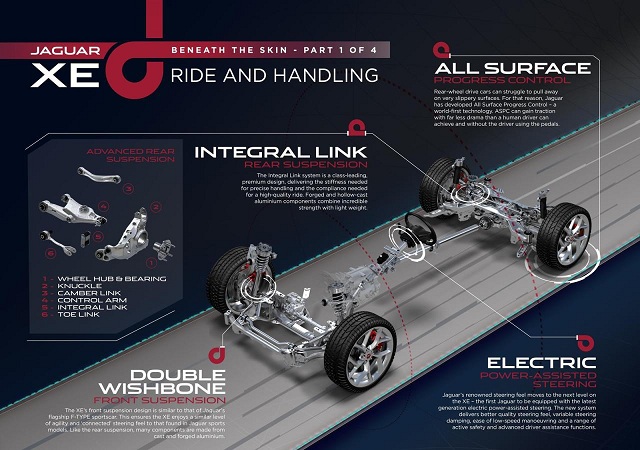 2015 Jaguar XE, With Front Suspension Derived From F-Type, To Be Revealed On September 8

Tata Motors: Beyond Jaguar, There is Ferrari